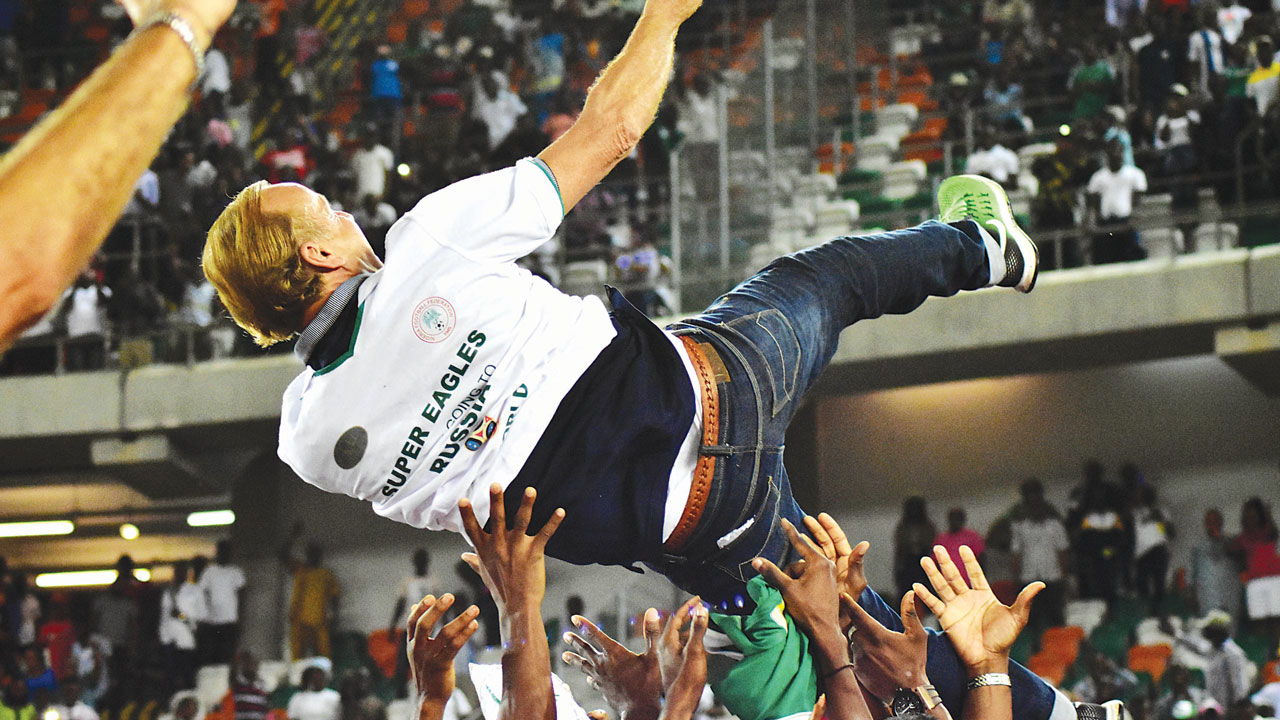 Celebrating Super Eagles’ players throw Technical Adviser, Gernot Rohr up in the air after their 1-0 defeat of Zambia to qualify for the Russia 2018 World Cup. PHOTO: NFF.

Members of the senior national team, Super Eagles, were all smiles on Saturday following the avalanche of rewards that came with their qualification for the Russia 2018 World Cup at the Godswill Akpabio Stadium, Uyo.

Nigeria defeated Zambia 1-0 to book its place in the 32-nation FIFA World Cup billed for Russia next June.Coming moments after defender, Shehu Abdullahi got N1 million and 10 bags of rice for his man of the match performance, multi–millionaire business mogul, Chief Kensington Adebutu rewarded the entire team with the sum of N50 million for becoming the first African country to qualify for the 2018 FIFA World Cup.

While presenting his cheque to the team, Adebutu praised the Super Eagles for their determination, professionalism and commitment throughout the qualifying campaign, which saw them overhaul the so–called Group of Death with a game to spare.

Speaking with the duo of midfielder Ogenyi Onazi and match winner, Alex Iwobi, the successful businessman urged the team not to rest on its oars, but to prepare hard to be worthy ambassadors of Nigeria and Africa at the FIFA World Cup finals in Russia next year summer.

Meanwhile, Super Eagles’ Manager, Gernot Rohr has revealed that the team would begin preparation for the World Cup immediately.

Nigeria has won four matches, including the 2-1 defeat of Zambia in Ndola on match day one, 3-1 victory over Algeria in Uyo, 4-0 bashing of Cameroun also in Uyo and Saturday’s 1-0 win in the reversed fixture against Zambia on Saturday. The team’s only draw came against Cameroun in Yaoundé.

The Super Eagles will go to Algeria for the final game of Group B already assured of a place in Russia.Speaking after Saturday’s game against Zambia, Rohr said: “It is not over yet. We need to build a solid team for the World Cup.

“We won four of the five matches played. With the quality of teams in the group, I didn’t think it would be possible.”On the game against Zambia, Rohr acknowledged that “it was a very difficult game… in fact the most difficult for us in the qualifying series because of what was at stake; because we knew a win would take us there and we were eager to finish it off.

“I commend the Zambians for their spirit. They fought very hard. This team was different from the one we defeated in Ndola last year; this was a much better and stronger team.

“I am very happy for the players and for this great nation, for us to qualify with a match in hand. It is a good feeling and after this night, we will begin to plan about how to prepare for the World Cup.“But we have the final match in Algeria next month, and perhaps we can have a friendly within that window as well and begin the preparation for Russia 2018.”