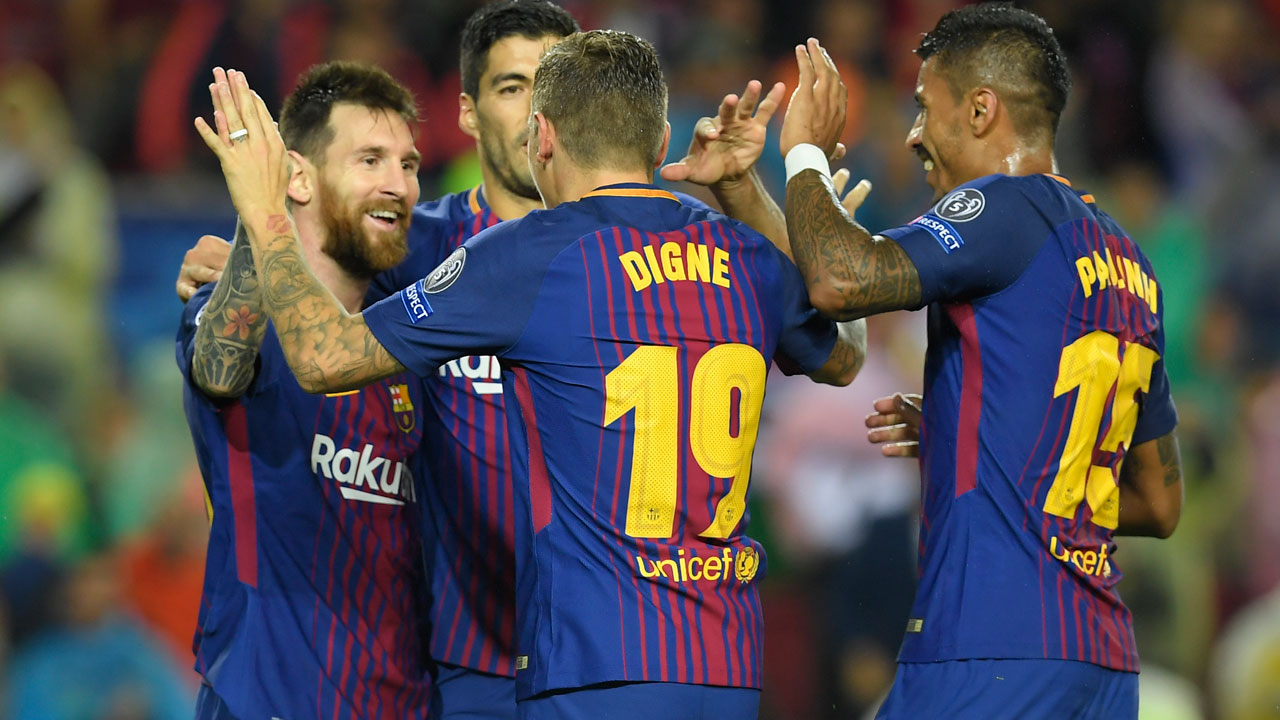 Barcelona shrugged off an early Gerard Pique red card and the distractions of a first match at the Camp Nou since a violent crackdown of an independence referendum in Catalonia to beat Olympiakos 3-1 on Wednesday.

A Dimitrios Nikolaou own goal and second-half strikes from Lionel Messi and Lucas Digne ensured a comfortable evening for the hosts on the field, while the political tension sweeping across Catalonia was seen in the stands despite a low turnout due to torrential rain.

Barca lead Group D with a perfect record from three games, while Juventus remain three points behind thanks to a 2-1 win over Sporting Lisbon.
s
A near 50-metre banner produced by the club called for “Dialogue, Respect, and Sport” before kick-off as Barca continued their plea for both sides of the political divide to reconcile their differences.

“In such a complicated, difficult situation in Catalonia, Barcelona has to take a stand and our position is very clear – we want dialogue,” Barca president Josep Maria Bartomeu told Barca TV.

“By speaking people understand each other and come to points of agreement. “We also ask for respect for everyone involved in such a complex situation in Catalonia and respect for Barca.

“And finally sport because we are a sporting club, not just in football but basketball, hockey, handball and we will continue to compete on the field.”

Catalonia’s separatist leader Carles Puigdemont must abandon his bid for independence from Spain on Thursday or face an unprecedented move by Madrid to seek a suspension of his region’s autonomy.

Barca’s singing section also held up a banner reading ‘Freedom for Catalonia’, while there were habitual chants in favour of independence in the 17th minute of each half to mark the fall of Catalonia in the Spanish War of Succession in 1714.

Those cries were briefly halted in the first period, though, as Barca went in front in the 18th minute when Nikolaou sliced Gerard Deulofeu’s cross into his own net.

The club have supported Catalonia’s right to self-determination in a referendum, but stopped short of backing independence.

Barca beat Las Palmas 3-0 behind closed doors on October 1 as a protest at the violent scenes across Catalonia, according to Bartomeu.

However, the decision to go ahead with the match proved divisive as two Barca board members resigned in the aftermath and there were calls for Bartomeu to resign from supporters at the start of the second half.

Barca announced on Tuesday representatives of pro-independence citizens’ groups Omnium Cultural and the Catalan National Assembly (ANC) were invited after their leaders Jordi Cuixart and Jordi Sanchez were detained on Monday on charges of sedition. However, both organisations refused that offer.

Messi scores free-kick
Pique dominated headlines for his outspoken criticism of the police brutality on the day of the October 1 referendum and his subsequent treatment when on international duty with Spain as he was jeered.

However, for once it was his performance on the pitch that was left open to criticism as he was stupidly sent off for slapping the ball into the net two minutes before half-time after picking up an early booking.

Barca, though, shrugged off their numerical disadvantage as Messi scored his 100th goal in European competition and 97th in the Champions League on the hour mark.

The Argentine dinked a free-kick towards goal, but needed the help of a poor effort from Olympiakos ‘keeper Silvio Proto, who merely helped the ball on its way into the net.

Messi was involved again for Barca’s third three minutes later as his cutback was drilled home by Lucas Digne.

Olympiakos pulled a goal back a minute from time as Nikolaou made amends for his earlier error with a towering header, but the Greeks remain rooted to the bottom of group without a point.