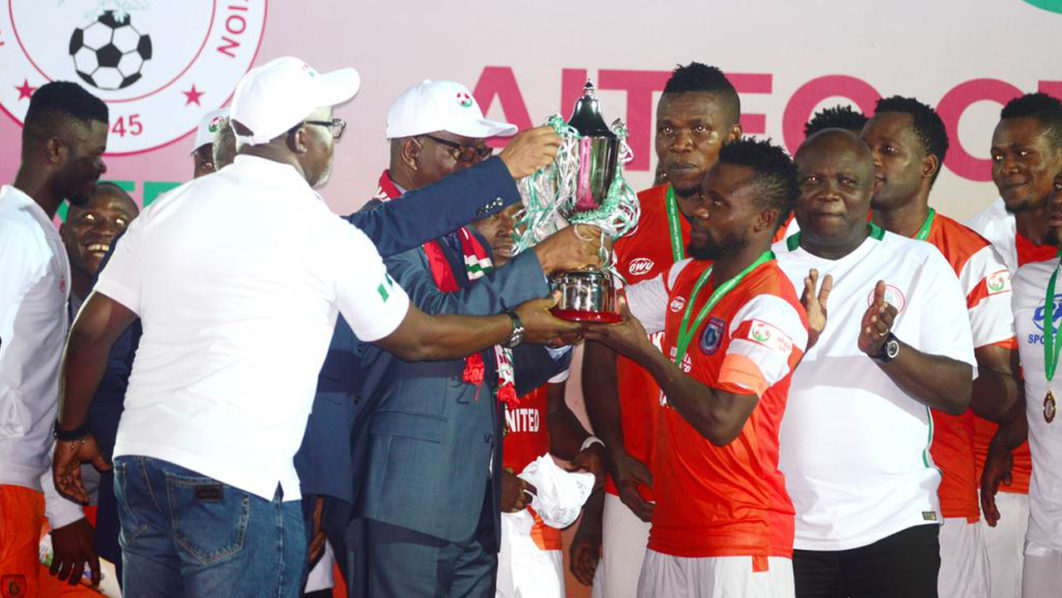 There is bad and there is the final of the Aiteo Cup. For an actual football match, Akwa United vs Niger Tornadoes disappointed on every level. The bemusing part of the game was that this wasn’t a game played on super slow speed, replete with sideways passes and lacking atmosphere.

It actually involved a lot of running, passes that had verticality and an almost packed full stadium with the fans at the stand labeled the Aiteo stands banging the drums and blowing the horns with brio. But, the running was scatterbrained, the passes were mostly poor ending at the opposition’s feet and it was maybe a brawl short of chaos. This was a game not befitting for the final.

Heavy touches, poor first touch, overweighed passes was the theme of the game that perhaps had the team overwhelmed by the stage or pressured by the presence of the dignitaries, the CAF president, three state governors , the NFF president and the Super Eagles Coach amongst others. There’s an excuse to be had for the alien feel the ball had as it was different from what they were used to and they were only playing it for the first time. Afeez Aremu at some point responded to his coach’s berating that the ball was bouncy and wouldn’t sit properly. Abdu Maikaba’s side are famed for their ball-playing ability, playing progressive, entertaining football but all of it eluded them in the evening.

At some point, it looked like the team in their heads knew what they wanted to do, trying to move the ball at pace with quick interchanges but there was just that execution missing, legs on a different wavelength to the head. Of different wavelengths, Super Eagles invitees, Aremu and his midfield partner Ifeanyi Ifeanyi who can’t claim to be strangers to the CAF supplied ball were shockingly discordant, best surmised from Ifeanyi cluttering Aremu on the ball. The midfielders were distant and barely offered one another support during the game, certainly, Rohr wasn’t impressed.

After the regulation time ended with the scoreline goalless (not even a streak of luck could produce a goal), the penalty shootout capped a more than fair representation of the game. There was no penalty to throw-in moment as Afro-pop singer Small Doctor sang before the game but there were poor penalty takes. After the fifth round of takes, both teams had lost six out of the ten spot kicks pushing the penalties to sudden death.

There had to be something to separate the teams, Gabriel Okechukwu settled for the match-winning penalty when he could have had the match-winning moment during the regulation time when he skied a shot, through on goal. Okechukwu who replaced the cup’s highest goal scorer Christian Pyagbara showed a bit more nous than the man he replaced, dropping deep and varying his movements as well as trying to hold up play but he was guilty of holding onto the ball for too long or miscuing a pass when he elected to eventually let go of the ball.

Akwa United won the final and will represent Nigeria in the CAF Confederations Cup after they agonizingly fell one point short of qualifying for the tournament through League places. On the basis of the game yesterday, Akwa United are undeserving of the continent but neither were Tornadoes, perhaps fate played a hand just helping Akwa nick it, ensuring the best four teams in the Nigerian League will play in the tournament.