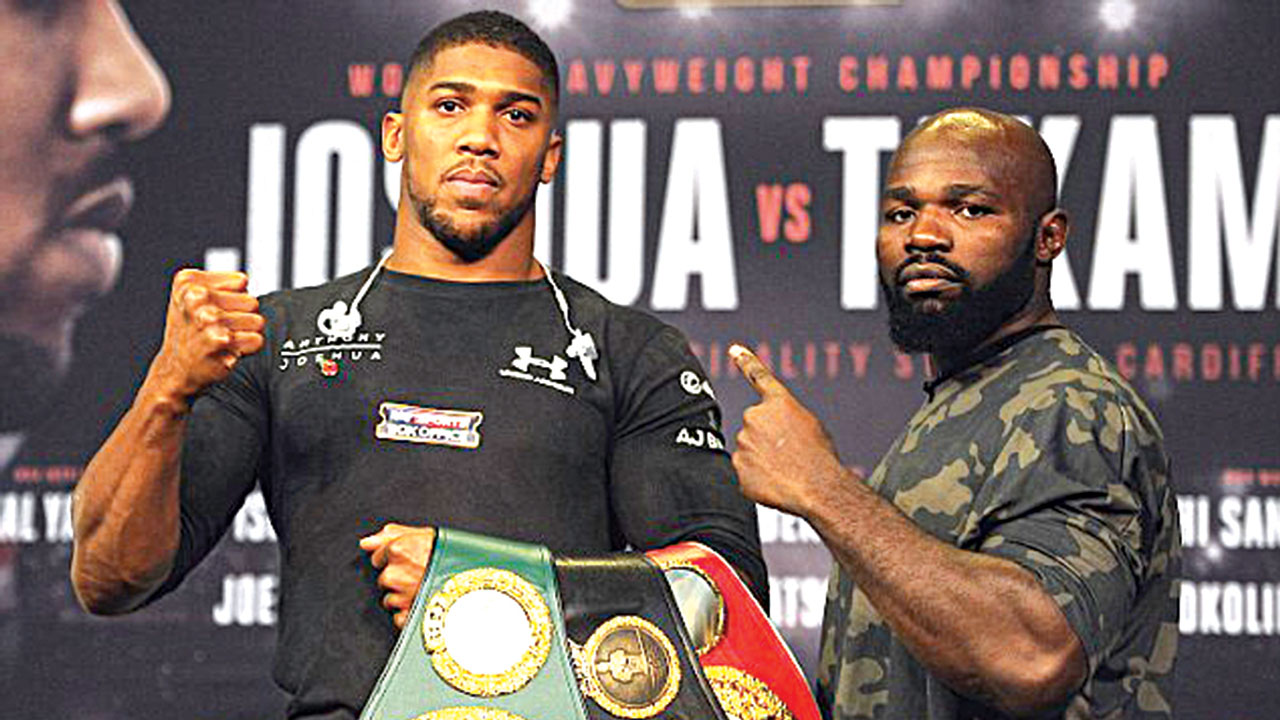 Though, Joshua never represented Nigeria at any boxing competition, his challenger in today’s bout, Takam did for Cameroun before turning professional in France. As an amateur boxer, Takam represented Cameroon in the super heavyweight division at Athens 2004 Olympics Games. He was a former WBC silver heavyweight champion.

With the roots of the two pugilists traced to African soil, boxing fans in Nigeria, Cameroon and other parts of the continent and beyond are anxiously looking forward to the bout in Cardiff, England.

This is Joshua’s return to the ring after his memorable win against Wladimir Klitschko in April. He is entering the ring with 19 knockout victories under his belt. Joshua said fans should expect a lot of ‘fireworks’ as he defend his WBA, IBF and IBO heavyweight titles at Cardiff’s Principality Stadium against Takam today.

Takam stepped in as a late replacement after Joshua’s original opponent, Bulgaria’s Pulev, who pulled out due to shoulder injury. The Cameroun-born boxer holds a 35-3-1 win-loss-draw record from his 39 fights across his professional career, which began in December 2005.

Joshua said the combination of his and Takam’s style will ensure fans in Cardiff get their money’s worth in today’s heavyweight clash.

While Joshua is 28 years old, Takam is 36. But the Nigerian-born boxer compared his opponent’s build to a former sparring partner and believes Takam’s technique will make for a more entertaining bout than if he were fighting Kubrat Pulev, as was originally planned.

“It’s probably a more enticing fight [than it would have been against Pulev],’ Joshua told Sky Sports’ press conference. ‘I spar my cousin Benga and he’s just like Takam’s build. I think our styles will create some real good fireworks’.

“Cardiff is looking really good and it’s good to be fighting here again,’ added Joshua. ‘[Fighting] is all I do, it’s all I know and it’s an honour to be defending these belts. I’m just looking forward to getting back to business.’

Joshua said he believes ‘hungry’ fighters like Takam ensure the heavyweight division will remain exciting for the foreseeable future.

“The fans are always going to be the winners in this division now because hungry guys are coming,’ Joshua added. ‘Takam wants to perform in the ring and it’s the same with me.

“I always say, the belt isn’t always representation of me… the belts get taken out of the ring after, I can’t fight with them on my shoulder. I’ve got a challenge in my mind, I keep my feet on the ground. I’m still hungry’.

‘Takam weighs 22 stones. He’s a better all round fighter and I’ have been preparing to box someone totally different,” Joshua stated.

As the exclusive African broadcaster for all Anthony Joshua fights, Kwesé will broadcast his fight against Takam live on the continent’s largest pan-African free-to-air channel Kwesé Free Sports. This means sports fans across the continent have free access to enjoy this explosive fight.

According to the General Manager, Kwesé Free Sports Nigeria, ChiChi Nwoko, Nigerian audiences can join the estimated 80,000 spectators expected at Cardiff’s Principality Stadium for two live screenings of the fight in Nigeria.

“Simulcast viewings will be held in Joshua’s ancestral hometown of Sagamu at the Baba Josh Memorial Hall, as well as at the Hard Rock Café in Lagos,” Nwoko said. “The live screenings, which coincide with the Sagamu Day celebrations, are endorsed by the Sagamu Youth Congress and will have members of the Joshua clan in attendance.”

“The main bout is scheduled to start at 10.30pm however, doors at the Sagamu and Lagos viewing centres will open from 6pm to give boxing fans the opportunity to watch all the undercard fights. Spectators at the viewing centres will also be kept entertained by musical performances and stand-up comedy from local artists in the build up to the fight.

“As the only pan-African and local sports channel in Nigeria with exclusive rights to the fight, Kwesé Free Sports will broadcast the fight on UHF 32 in Lagos or channel 732 on Free TV decoders in Jos and Abuja,” added Nwoko.