Home Art ‘Fish Out Traditional Fabric Which Is Unique And Homogeneous To Ekiti’, Says...

The Director General Ekiti State Council for Arts and Culture , Ambassador Wale Ojo Lanre made this call during an official visit to the Council of Traditional Rulers at the House of Chiefs ,Old Governor Office, Ado Ekiti.

The Director General pointed out that, ‘it is a fact that we are homogeneous in language but also it is our believe that Ekiti has that special fabrics which is unique and of great ancenstral value to the culture and tradition of Ekiti . I am thus utilizing this opportunity of urging our traditional rulers to fish out that antecedental fabric which all Ekiti indigenes will not only be identified with but be proud to display anywhere  to further reinforce the homogeneity of our state’ 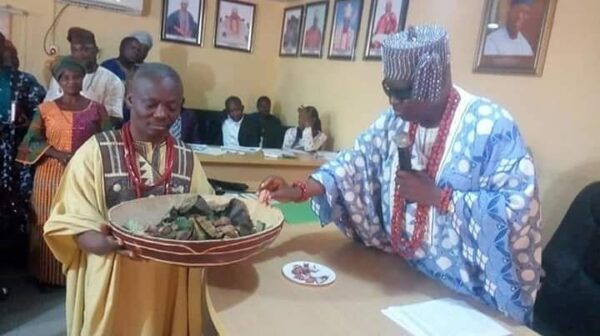 He  said that Governor Kayode Fayemi has the highest respect for the traditional institution hence ‘has charged the Ekiti State Council for Arts and Culture to ensure the reverencing of  traditional stool and enhancement of traditional culture ,values , arts, sacred places  and heritage sites’.

Responding on behalf of the traditional rulers ,the Elekole of Ikole ,Oba Adewumi Ajibade  , who was the acting Chairman for the meeting,commended Governor Fayemi for his visionary and revolutionary acts ,deeds and steps particularly in the arts and culture sector

He pointed out that the visit by Ojo Lanre is a clear demonstration of the government serious commitment to the promotion of culture , enhancement of the arts and protection of the pristine heritage of Ekiti people