Alhaji Sa’ad Hashidu, the state Director of Forestry and Wildlife Management said this in an interview with the News Agency of Nigeria (NAN) on Thursday in Gombe.

Hashidu said the issue of persistent attacks between the hippos and fishermen in Dadin-Kowa was discussed by the National Council on Environment in 2017 and agreed that a hippo colony be established as a permanent solution. 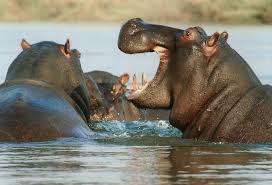 The director added that the meeting mandated the National Park Service Board to liaise with the state government to work out the modalities.

“With regard to the outcome of the council’s decision reached in Abeokuta, Ogun State in 2017, we wrote a memo to the state government requesting for funding to bring the National Park Officials for a feasibility study.

“ We are expecting that as soon as the fund is made available, we will bring the officials to do the needful so that the specie can be protected too.

“Also, a consultant from the United Kingdom visited last week for a feasibility study. She held a meeting with the Yamaltu Emirate Council, officials of Dadin-Kowa dam, fishermen and farmers on the issue.

“ She is working out modalities too to get international donors to synergise with the state government to establish hippo colony,” he said.

Hashidu explained that by colony the species would be confined within a particular area in Dadin-Kowa dam, adding that as conservationists, it was their duty to protect the hippos from extinction.

He stressed that the measure would end the clashes and boost socio-economic activities of the area, as there would be no challenge of hippos grazing or destroying crops or fishing equipment.

According to him, it will also be a source of revenue to the state government as tourists and researchers will be visiting the hippos colony.

Hashidu, however, noted that in the interim, forest and game guards had been contacted to help chase back the hippos to the dams whenever they made attempts to graze on farmers’ crops.

He agreed that the guards have not been active of recent due to paucity of funds, but assured they would  resume soon.

NAN reports that Malam Sa’adu Adamu, leader of the fishermen in Dadin-Kowa had on March 28, raised an alarm over threats that the animal pose to their lives and business.

Hippopotamus, referred to in anciest Greek as the ‘river horse’, is a large, mostly herbivorous, semi-aquatic mammal.

It is the third largest living land mammal after elephants and white rhinos.