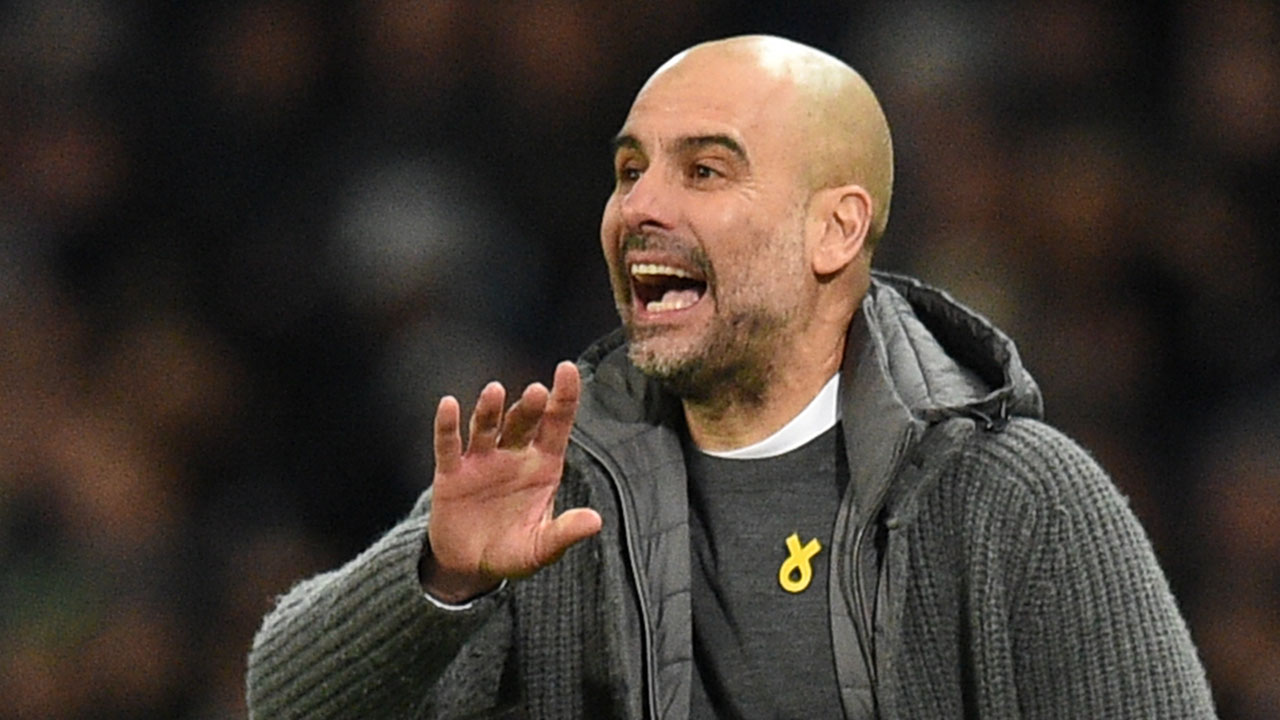 Manchester City’s Spanish manager Pep Guardiola gestures from the touchline wearing a yellow ribbon on his shirt during the English Premier League football match between Manchester City and Arsenal at the Etihad Stadium in Manchester, north west England, on February 3, 2019. (Photo by Oli SCARFF / AFP) /

Pep Guardiola believes the demands of challenging for four trophies throughout February will take even more of a toll on his side than the famous demands of fixture congestion in December.

City are still in with the chance of completing a historic quadruple of the Champions League, Premier League, FA Cup and League Cup, but Guardiola is concerned at the intense physical demands that will place on his squad.

A run of seven games across the four competitions in February is not quite as demanding a schedule as the nine matches they faced during December, three of which City lost.

However, Guardiola suggested that with more at stake this month, the task facing his squad is even tougher.

After beating Arsenal in the Premier League last weekend to start the month, City can go top of the table when they visit Everton on Wednesday before hosting Chelsea on Sunday.

Then comes an FA Cup fifth-round tie, the first leg of their Champions League last 16 tie away at Schalke and the League Cup final against Chelsea on February 24.

“When I was abroad and before I came here, everyone talked about December,” Guardiola said on Tuesday.

“But when Boxing Day was finished and I saw the schedule (for February), I said ‘but this is worse’. Even worse. That is true.

“If you are out of more competitions it is more comfortable. February is tougher than December. January brings the Carabao (League) Cup and FA Cup with teams from the Championship and League One – with all respect it is different.

“Now we have Chelsea and they can prepare all week and we know how well Maurizio Sarri will prepare for the game.

“We have Schalke and the final of Carabao Cup and Premier League. It is what it is but it is nice and I prefer to be there.”

Guardiola has some experience of being involved in a tight title race while contending in six competitions as Barcelona manager when they beat Real Madrid to win La Liga in 2009-10.

‘A lot of stress’
And he is torn over the pros and cons of the mental fatigue caused by fixture congestion against the extra motivation of creating history.

“In some ways, it’s a problem in terms of how many games you have and the mental effort needed to be consistent in every single competition. You know when you lose one game you can lose that competition,” he added.

“It demands a lot of stress and you need a little bit of a break.

But at the same time, when you arrive after this month in March from my experience, and the days are longer, your training sessions are in better conditions, the sun is here, you see the end of the season is closer, the pitch is in better condition, you can take a coffee outside and in that situation you are in four competitions – wow, it’s an extra plus.

“Then you realise: ‘Wow, we can do something special.’ But we are not right now in that position because this month is terrible, in terms of the fact that every game is a final and we have to wait.”

Victory at Goodison Park on Wednesday will take City above Liverpool at the top of the table on goal difference and Guardiola believes that could be what separates the sides come the end of the season.

“The first message is to win the game and the second one is that if you can score, score and if you can avoid to concede, do it,” he added.

“The Premier League could go to goal difference, I agree. We are not going to say to the guys that today we have to win 5-0. I never said that. First you have to win the game and then second try (to score more), because it can happen.”