An extraordinary man with talent like non-other; the lean, spartan look belies the mischief that abounded in him; sharp tongued and quick witted, there’s no doubt that were he alive today, he’d be your favourite comedian’s comedian. But sometimes, extraordinary people have short lives. 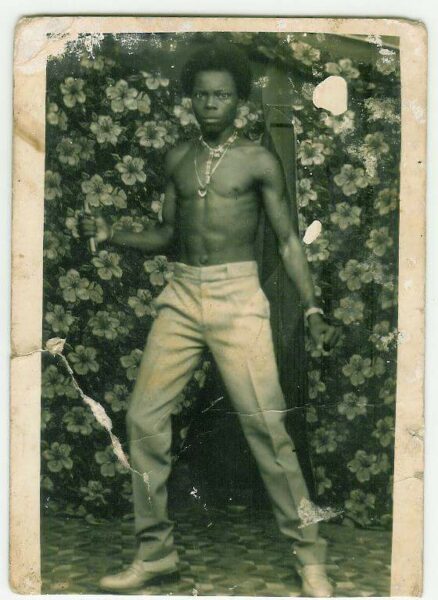 Elijah Oluwagbemiga Adeboye a.k.a Alhaji Pastor Oluwo Funwontan was one of those type of people. In his 44 short years on the face of the earth, he beat a disadvantaged upbringing, he beat competition before it existed, he beat broadcasters to earn prime time radio hours and in the end, he beat death- even after sixteen years, he’s still fondly remembered globally and even in Ode-Omu his place of birth.

In remembrance of his sixteenth years demise Infotrust visited Ode-Omu, a sleepy town, unaffected by the Oshogbo-Gbongan Expressway that split the town in half. A community where as a child he was precocious often chastised ‘forwardness’. Adeboye was one of those children who didn’t realize when their mothers gave them the ‘eye’ to shut them up in the presence of guests. Young Gbenga let it rip without filter: he said any and everything his eyes saw.

In company of Dr. Jide Dasaolu, a staunch fan of Jengbetiele, as well as a Tour Guide, Mr. Waheed ‘Agada’, Infotrust visited Ode-Omu and realized that all admirers of this legend that once trod this part of our world need to come together to truly immortalize Alhaji Pastor Oluwo Funwontan.

Gbenga Adeboye, during his life time touched the life of many indigenes of his community as attested to by our tour Guide and some other persons interviewed. He built a Church, The Apostolic Church where his mother worshiped during her life time. He was loved by all and sundry in the community. Some of the church members who were interviewed spoke on condition of anonymity that the church has been the way it is now since its inception 17years ago when Gbenga Adeboye completed the building.

However, it was a pathetic sight to behold when the team visited the uncompleted building site of the humour merchant. To say the least, it has become a forest in its own right. In Yoruba parlance, “Bi olode ko ba ku, ojude re ki wu koriko”.  Infotrust reliably gathered that before the death of his mother, a friend of his, Ereke ni soobu has always been sending money to her to help clear the bush within and around the structure on a yearly basis, but since after her death six years ago, this has stopped. This accounts for the bushy nature of the massive land that was seen.

Our Tour Guide, Mr. Waheed, a popular vulcaniser in Ode-Omu, took our team to see the proximity of the structure to the main expressway, indicating the economic viability of the structure and space left behind by Gbenga Adeboye. It is the general believe within the community that the completion of the structure is the only viable way by which the Name and Works of the Legendary Humour Crooner can forever be immortalized.

Dr Babajide Dasaolu of the Philosophy Department, Olabisi Onabanjo University, therefore appealed to all lovers of the man called: Funwontan; Alhaji Pastor Oluwo; Abefe; Jengbetiele; Itu Baba Ita; Alaye mi Gbengulo; One Man Battalion; Apagunpote1; Olayinka; Omo Baba Overseer; Awo Itu Baba Ita; Awo Baba Laisi Abesupinle to rally together and immortalize Gbenga indeed. He implored all to come together, build his house in Ode Omu and make the place a museum for all his works, for other comedian works as well. He said, “By completing the house and making it a museum for his works and others, his name will forever be immortalized in his home. He surely deserve this!”