There’s no better sight in football than an outfield player being forced into goal.

It rarely happens – and it’s almost unheard of at the top level.

But on Wednesday night, Manchester City‘s Champions League clash with Atalanta was graced with some wonderful scenes.

First choice ‘keeper Ederson was forced off at half-time through injury and he was replaced by Claudio Bravo.

But the back-up didn’t make it to the full-time whistle either. He was sent off in the 82nd minute after making a last-man challenge on yards outside the penalty box.

After much confusion, Kyle Walker was summoned from the bench and made to guard the goal for a little over 10 minutes.

To be fair to the Man City right-back, he certainly didn’t disgrace himself. In fact, he made two saves and kept a clean sheet – and also made a lot of fans laugh too.

After his first catch, Walker was seen bouncing the ball in his hands for more than a few seconds before clearing upfield. Check it out:

Things you absolutely LOVE to see… 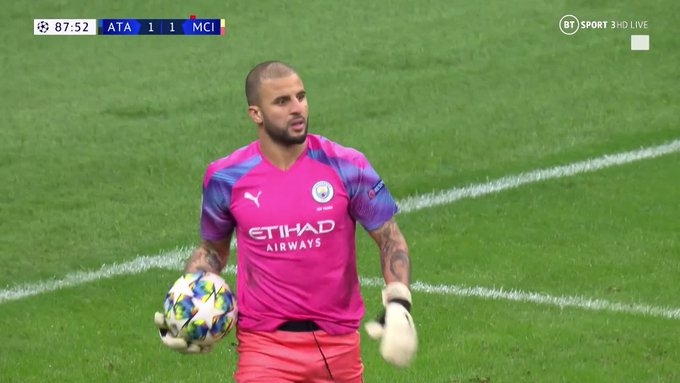 1,009 people are talking about this

The aftermath of the second save was even better.

Walker dropped to the floor to cover the ball in an attempt to time-waste again. But what made it hilarious is that he only hit the deck five seconds are making the save.

Incredible. If you look closely, you can even see Benjamin Mendy frantically demanding that Walker flops onto the ball. Watch it below:

5,435 people are talking about this

Both incidents were just brilliant and it’s top, top s***housery from Man City. Pep Guardiola would be proud.

In fact, his side killed the game perfectly after going down to 10 men. Atalanta barely troubled Walker between the sticks and were limited to just two long-range efforts.

One point for the Italian side, their first of the competition, wasn’t really enough either as it leaves them rock bottom of Group C.

City, on the other hand, are all but qualified for the knockouts. They top the group with 10 points, while Dinamo Zagreb and Shakhtar Donetsk are level on five.

Why is Rohr so desperate?

Injury Rules Out Son For Rest Of Season

Bale hopes for Real stay but will consider options at the...

Give Your Life Away

‘Nigeria has received $14.2b from World Bank group’