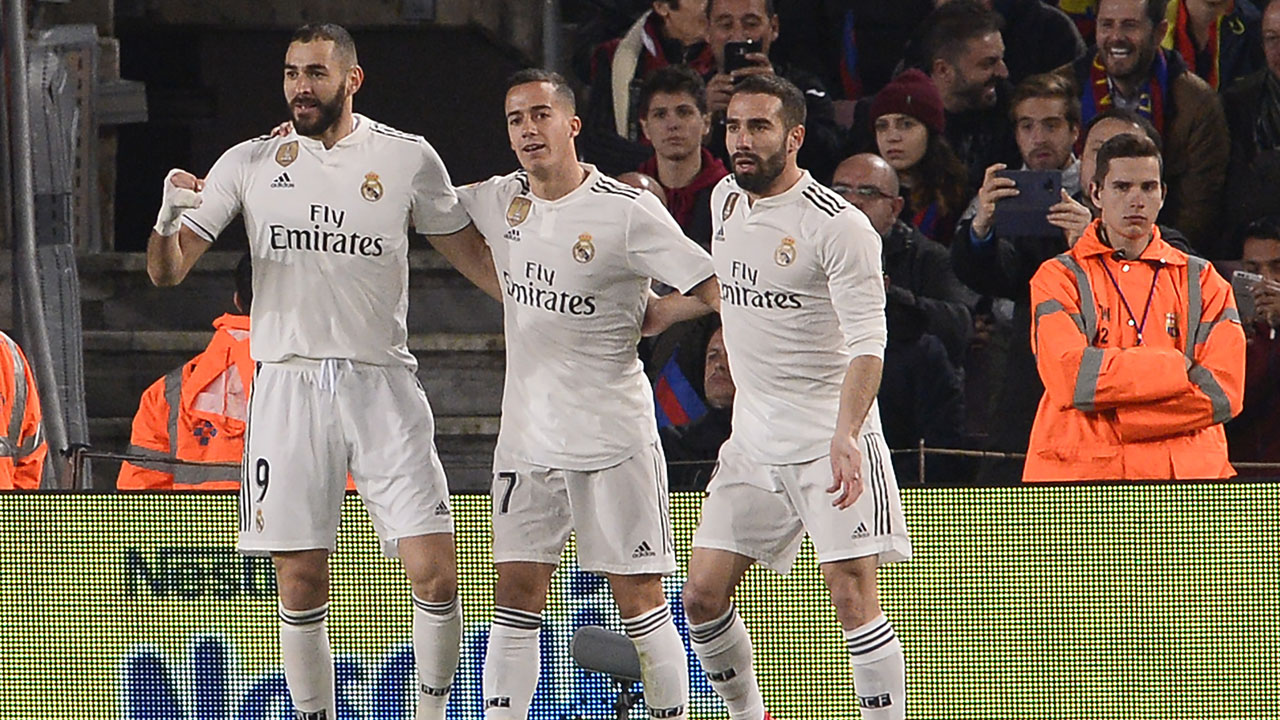 Real Madrid gained a measure of redemption at the Camp Nou by holding Barcelona to a 1-1 draw on Wednesday and taking the upper-hand in the semi-final of Copa del Rey.

Neither Lionel Messi nor Gareth Bale were named in the starting line-ups for this first leg but their replacements filled the void as Malcom’s curling shot cancelled out an early opener from Lucas Vazquez.

After an impressive opening 20 minutes, Madrid were largely second best in a compelling, if unspectacular, Clasico but the result leaves them well-placed heading into the second leg at the Santiago Bernabeu on February 27.

For Santiago Solari’s side, a resilient, gutsy display will also help erase the memory of their humiliation here in October, when they were thrashed 5-1, a result that caused Julen Lopetegui to be sacked the following day.

“Comparisons are unhelpful,” said Solari. “But this result shows how hard the team is working.”

Messi, who had been struggling with a thigh problem, and Bale, who faces a fight for place after recovering from a calf injury, both came on after the hour but neither could inspire a winner.

Instead, it was Vazquez, and two youthful Brazilians that took centre stage. Vazquez scored but Vinicius Junior, the youngest Real Madrid player to feature in a Clasico this century, was his team’s greatest threat until the 18-year-old departed in the second half.

“I’m not surprised by how he plays because I’ve known him since he arrived,” said Solari. “But an 18-year-old boy playing and developing in this way, that is a surprise.”

Malcom was just as unpredictable and in the end, it was the 21-year-old’s intervention that keeps Barca on level terms.

“The tie is in the balance,” coach Ernesto Valverde said. “A draw is a fair reflection,” said Sergio Busquets.

Barely 10 seconds had passed before Toni Kroos snapped into Ivan Rakitic, setting the tone for what was a dominant opening spell from Madrid.

Vinicius led the way. He was fearless, full of imperfections and erratic decisions but delivering moments of clarity too when Madrid were at their most threatening.

Benzema sets up Vazquez
He jinked inside Nelson Semedo and teed up Kroos before producing the cross that created the goal, an arching ball over the head of Jordi Alba, which Karim Benzema tucked back for Vazquez to poke in.

Rakitic and Philippe Coutinho were both careless in possession but Vinicius lacked precision to capitalise, first scuttling into Benzema and then misreading the Frenchman’s run.

Barca had been just as frantic, with Luis Suarez even tripping over his own feet. But they improved and after half an hour, were in the ascendancy.

Malcom missed a one-on-one and then became their best player for a period, crossing for Rakitic to head against the bar and teeing up Suarez to sting the hands of Keylor Navas.

The home fans called Messi’s name at the start of the second half and when he jogged up the touchline shortly before the hour, they roared as if for a goal.

They did that soon after too, after an equaliser of chaos and quality in equal measure. Navas rushed out to block Alba before Suarez curled a brilliant shot that beat the diving Sergio Ramos but not the post.

It spilled to Malcom and he still had work to do, 20 yards out with white shirts in front. He found a gap.

Messi came on, along with Arturo Vidal, Bale and Casemiro. Vinicius was among those to make way, his bright start fading with fatigue.

Neither side seemed sure how much to commit for a winner. Messi twice weaved through but the best chance fell to Bale, who received from Benzema after Marc-Andre ter Stegen’s skewed clearance. The goal was open but Bale’s touch was heavy and Semedo made a crucial block.