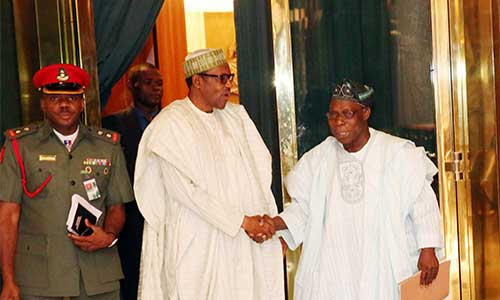 A former chief of Army staff, Lt-Gen Alani Akinrinade (retd.) on Thursday described former Nigerian president Olusegun Obasanjo as a man that lacks a good sense of judgement and should be ignored.

“Some of us who knew him in the military and were privileged to see him operate during the civil war know if there is one thing Obasanjo is not blessed with, it is a good sense of judgment,” Akinrinade said in an advertorial published in at least three national dailies – The Punch, The National and the Nigerian Tribune – on Thursday.

Akinrinade was Nigeria’s chief of Army staff from October 1979 till April 1980, and then Chief of Defence Staff until 1981 during the Nigerian Second Republic.

The ex-service chief criticism of Obasanjo came as a result of his fallout with Nigeria president Muhammadu Buhari, which led to him endorsing his former vice president and presidential candidate of the opposition People’s Democratic Party (PDP) Atiku Abubakar.

Obasanjo’s fall out with Buhari was not the first time the former president has had rifts with incumbent presidents.

In 2013, Obasanjo had labelled Buhari’s predecessor, Goodluck Jonathan, an incompetent leader and supported Buhari, who emerged president in 2015.

After three years, Obasanjo said Buhari was unfit to govern Nigeria and described him as a nepotic leader, who lacks economic knowledge.

But Akinrinade warned Nigerians to be mindful to Obasanjo’s efforts to pitch his personal interests under the pretence of national interest.

According to Akinrinade, “Like his daughter – Iyabo reminded him in her letter, Nigeria does not belong to him. He should allow Nigerians to choose who they want and stop goading the citizenry for his own selfish interests.”

The ex-service chief, however, said the Nigerian media was to be blamed for giving him undeserved attention, thereby misusing their agenda-setting function.

He urged the media to uphold its responsibilities as the fourth estate of the realm and gatekeepers, who owe “Nigerians the responsibility of keeping this irritable man (Obasanjo) where he belongs – the waste-bin of history.”