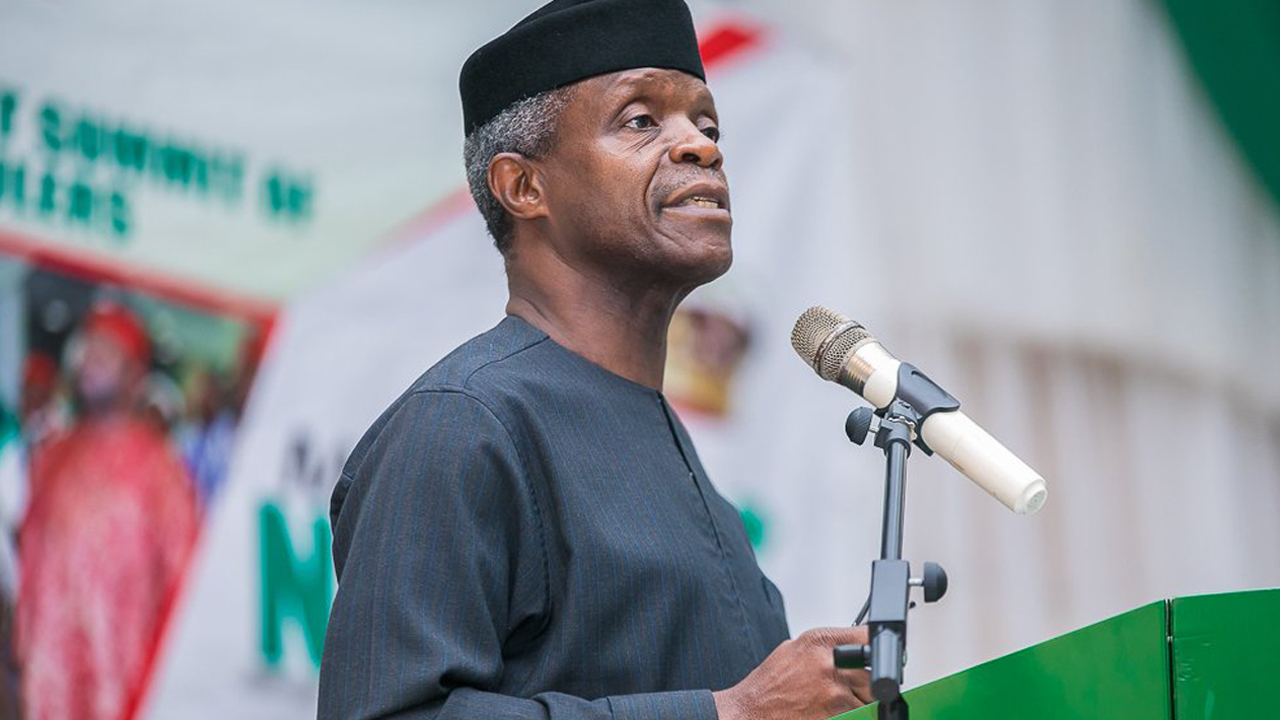 The Vice President, Mr. Yemi Osinbajo, has urged the people of Akwa Ibom State not to remain in the opposition any longer, stressing that, the state has no reason to be there.

He made this assertion while speaking during the local government campaign rally of All Progressives Congress (APC) governorship candidate for the state, Obong Nsima Ekere, held at Nsit Atai local government council yesterday.

“Akwa Ibom should not be in opposition, no reason. There is every reason for you to join so that you become part of the next level. All of the young people who are here, the government of President Buhari are determined to make sure that not only do you have jobs, but have quality jobs; that is one of the most important things we are doing. That is why you must support APC.

According to the Vice President, the state is strategically located with a lot of natural resources, noting that, once the state joined the wind of next level, it would also position itself for development. He said that, palm oil is abundant in the state and that, if properly harnessed, would replace crude oil and boost the economy of the state.

“We have found here palm oil which will be a replacement of crude oil, so, we are going to be number one in this local government. That is one of the reasons you must join the federal government under the APC,” he added.

Osinbajo further said that, APC federal government would establish Entrepreneur Bank to enhance small-scale businesses for women and youths if the party is voted into power, adding that, when the bank is established, it would give loans to youths and women at very low interest rate to improve their businesses.

He reminded party supporters that when APC was campaigning in 2015 that the party would provide jobs to five million people the opposition party did not believe, stressing that the APC has delivered on their campaign promises.

“N-Power is only the beginning; we are starting something called the entrepreneur bank. That bank is for giving loans to men and women like this in N-Power who have a plan for the future. The loans will be given to them at very little interest rate so that they can start their own businesses, and so that they can make progress.

He appealed to people of the state to vote for President Muhammadu Buhari, for bringing social investment to improve on the lives of women and youths.

Meanwhile, arrangements have been concluded for the Vice President to flag off Agbado (Lagos)-Abeokuta railway for commercial operation on February 6.

The Lagos-Ibadan railway project, which was 60 per cent completed would be open for free commercial operations for two months.

Minister of transportation Rotimi Amaechi while inspecting the project pointed out that there was huge improvement on the project and the Vice President would flag off the free train ride on February 6, 2019.

He said “I am impressed and from what I see, the Vice President is still going to ride on the train on the 6th except he has other arrangements. Once the Vice Presidents flag it off, we will start using it and it will be free. The free ride will be for two months.”

He added “the Vice president is coming to flag off the passenger use of the first phase from Lagos to Abeokuta which will reduce passenger travel time from one hour to 45 minutes and the reason why it is 45 minutes is because people might stop in different locations.”

On whether there are litigations on Iju to Abeokuta axis, he said: “There is none but if there is any, it will be inside the yard of NRC and there is one building that we are yet to pay compensation but it is not in court and we are still negotiating the compensation.

“What gives me joy most with this project is the fact that I can travel from Lagos to Abeokuta in less than one hour.”

According to him, there are two coaches on the Lagos-Ibadan corridor. “Certainly, they will not be enough, so, we have directed that they should go and get more coaches from Itakpe-Warri since the passenger traffic on that corridor is not as high as what we expect here. So, we are expecting two more coaches.”

Amaechi disclosed that the Abeokuta to Ibadan axis would be quicker as the problem is always the civil work and they have gone far, adding, “the only problem is the blasting of rocks and what is being done is to make sure that the track is ready before the end of June.”

On how far the Federal Government has gone with the negotiation for the Ibadan to Kano corridor, he said: “The Vice presidential candidate of the PDP, Peter Obi will say it was negotiated by the past government but we have told Nigerians that we are negotiating and we are asking them to give us a loan from Ibadan to Kano and they have said they are not ready to fund double track but single track. If we succeed with the negotiation, then before May to June, we should again begin to construct from Ibadan to Kano.”

On the narrow gauge concession the Minister said: “We are meeting with the South Africans on February 4, 2019 to conclude agreement and I will meet with their Minister and MD.”

On when Itakpe-Warri corridor will be commissioned, he said: “We will commission after we build the stations. They have 12 stations to build and they have gone far, so when they conclude, we will commission.”