Multiple Grammy award-winning songstress, P!nk has been honoured with a star on the Hollywood Walk of Fame.

The American singer is one of the most successful musicians in the world with over 90 million record sales to her credit, three Grammys, a Brit, an Emmy, a MTV Video Music Award and been named Pop Artist of the Decade by Billboard.

As her star on the Hollywood Walk of Fame was unveiled, she was joined by her husband, Carey Hart and two at the ceremony which held in Los Angeles. 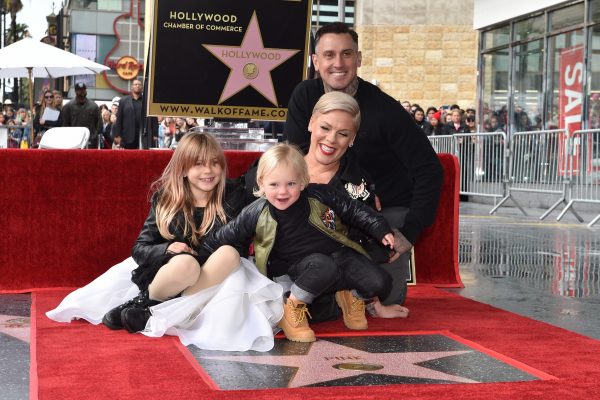 P!nk and her family on the Hollywood Walk of Fame | Photo – Instagram

The 39-year-old said of the honour,

“This is surreal. It has been a trip lately thinking back over the course of this career I’ve somehow managed to have. I signed my first record deal 23 years ago.

“I have achieved exactly what I wanted to achieve.

“Because I always knew what my strong points were. I don’t sell sex, I don’t sell perfume, I’m not the prettiest, I’m not the best. I’m fucking hard-looking and I have enough talent and I work on my fucking craft and I put my head down and I win.

It would be recalled that fellow singer, Christina Aguilera during a recent appearance on “Watch What Happens Live” with Andy Cohen debunked claims by P!nk that she (Aguilera) physically attacked her during their beef which has now been squashed.