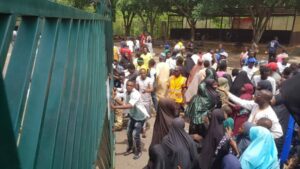 Islamic Movement Of Nigeria (IMN) popularly known as Shi’ites have forced their way into the assembly complex and chased away armed policemen on duty.

The protesters besieged the National Assembly in continuation of protests to commemorate the 68th birthday anniversary of their spiritual leader, Sheikh Ibraheem El-Zakzaky, who has been in detention since 2015.

But situation turned awry when some of them suddenly descended on the gate, shaking it vigorously until they succeeded in forcing it open, almost causing a stampede because of the crowd.

It took the appeal of leaders of the movement to stop the crowd from advancing into chambers of the assembly proper.

Despite provocation by the protesters, the Police remained calm and peaceful, and only pleaded with them not to go into the chamber.

UBA Foundation Rings in The Yuletide Season, Lights Up the Lagos Marina

NFF Congratulates Kunle Solaja For Being Honoured By FIFA