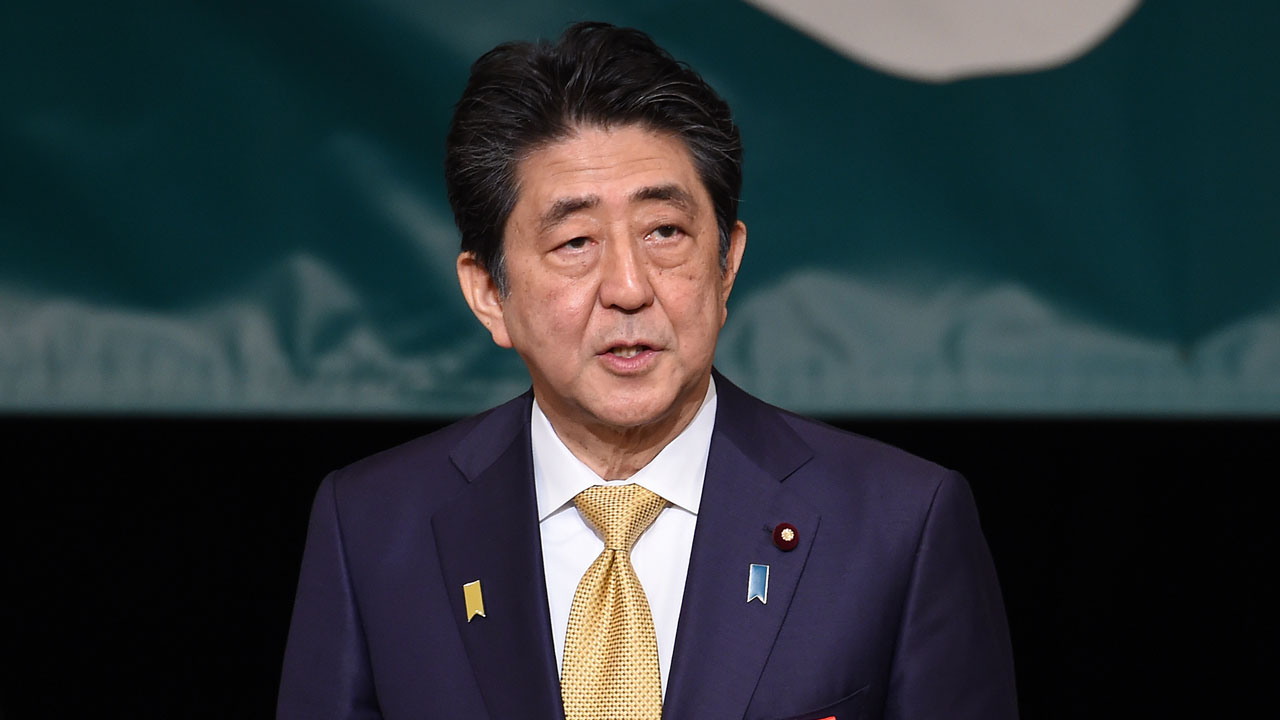 Japan’s Prime Minister Shinzo Abe delivers a speech to demand the return of the Northern Territories, a group of islands held by Russia, at a national rally in Tokyo on February 7, 2019. – Called the Kurils by Russia and the Northern Territories by Japan, the string of volcanic islands are at the heart of a feud between the two countries has prevented Russia and Japan from signing a formal World War II peace treaty. (Photo by Kazuhiro NOGI / AFP)

Japanese Prime Minister Shinzo Abe struck a conciliatory tone with Russia at an annual rally Thursday to demand the return of small northern isles claimed by both nations.

The conservative leader did not explicitly demand sovereignty of the Southern Kuril islands, an emotive issue that has prevented the Asian economic power from signing an official peace treaty with Moscow since World War II.

Instead, he vowed to focus on concluding an official peace treaty with Russia, after meeting President Vladimir Putin 25 times, most recently last month.

“It is not easy to resolve an issue that has remained unresolved for 73 years,” Abe told the rally in Tokyo, attended by hundreds of former islanders and their relatives.

“I am determined to take on the work to resolve the territorial issue by taking one step at a time with your earnest desire etched in my heart,” he said.

Abe speaks at the rally every year but struck a relatively softer tone on Thursday.

Despite the row, Tokyo and Moscow already have vibrant economic relations, with the likes of Toyota and Japanese energy firms heavily invested in Russia, operating major factories and sales networks.

And in recent years, Abe and Putin have discussed joint economic projects on the disputed islands between the Sea of Okhotsk and the Pacific Ocean. The Soviet army seized them in the last days of World War II, and Russia continues to control them.

Tokyo’s traditional refusal to recognise Moscow’s sovereignty there has been a barrier to a formal peace deal.

However, the two sides did sign a 1956 Soviet-Japanese declaration that Japan would receive two of the smaller islands after a peace deal.

Abe said the foreign ministers and special envoys from the two nations will meet this month to discuss a peace treaty, before he plans to meet with Putin again in June on the sidelines of a G20 summit that Japan will host.

The prime minister also said he would work with Moscow to enable former residents to visit their birth or ancestral places.

At the rally, Abe spoke in front of a large banner saying “Return the Four Northern Islands.” But he did not utter the phrase.

His focus on economic ties and delicate language on the sovereignty issue prompted some islanders to urge him to focus more on the subject, while others saw it as a realistic approach.

“We must not give up. We must demand the return of all four islands,” said Kimio Waki, 78, who left his home island of Kunashiri at the age of seven after World War II.

“Joint economic projects are in focus. But there is no path forward as far as the return of the islands goes,” he told AFP.