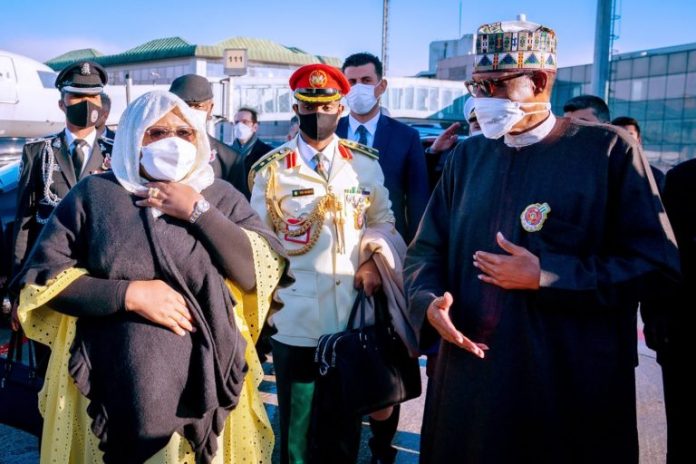 Nigeria’s first lady Aisha Buhari’s new pictures are fuelling pregnancy rumour across the country, with Nigerians wondering if she is actually expecting a baby.

In one of the photos seen by Peoples Gazette, Mrs Buhari, alongside her husband, President Muhamadu Buhari, was surrounded by security officials, with one of them carrying her handbags.

In a yellow lace kaftan and a black shawl draped over what appeared like a baby bump, 50-year-old Mrs Buhari tenderly placed her right hand on it.

Another image showed the first couple seated in a plane. A zoom-in on Mrs Buhari shows a full face like that of a pregnant woman, different from her usual robust youthful visage.

A third picture showed the couple on the plane’s stairs, with an apparent baby bump as the first lady gently stepped down the flight of stairs.

“Is Aisha Buhari pregnant or what is in her stomach,” a curious Twitter user @Promise, said.

Another Twitter user, @Solowizzy also commented on the photos, stating, “Nigerians, what do you think about this pictures?  Aisha Buhari is obviously pregnant.”

If pregnant, Mrs Buhari, already a grandmother, would be toeing the steps of wives former Nigerian heads of state- Victoria Gowon, Maryam Babangida and Maryam Abacha,- who gave birth while their husbands ruled Nigeria.

It is also expected that Mr Buhari’s supporters will use it as a political point that the incumbent president is virile despite being assailed by ill health over the years since assuming power in 2015.

The photos were taken following the first couple’s arrival from Turkey.

Mrs Buhari’s spokesperson, Suleiman Haruna, did not respond when The Gazette contacted him for comments regarding the pregnancy rumour surrounding the first lady’s latest pictures.