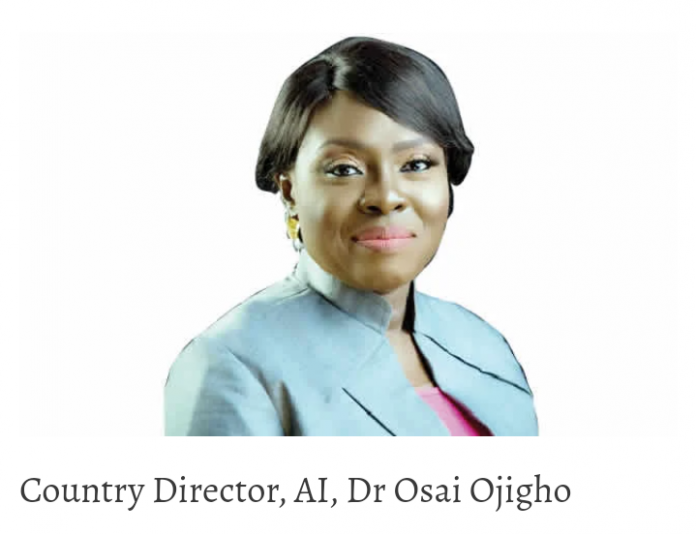 Amnesty International, on Wednesday, called on the Federal Government to upgrade the nation’s legal system to ensure holistic support for survivors of rape and other forms of Gender-Based Violence.

The organisation also said 11,200 cases of rape were reported in the country in 2020.

The Country Director, AI, Osai Ojigho, stated these during the public presentation of ‘The Survivor’s Guide’, a practical text for survivors of rape and other forms of Sexual and Gender-Based Violence.

At the event, the Executive Director of Invictus Africa, Bukky Shonibare, said the presentation and distribution of the text was in commemoration of the 16 Days of Activism against SGBV.

Shonibare said the guide was developed as part of ongoing prevention, accountability and support project, which was aimed at “preventing sexual and gender-based violence through capacity, demanding accountability from duty bearers, using empirical evidence, and providing support to survivors through access to relevant resources.”

“With the survivors guide, we hope that survivors feel supported and that the people, who are in their lives, also are provided with language to truly support them and not further, knowingly or unknowingly, contribute to their trauma,” she added.

Ojigho said until survivors could feel comfortable to tell their stories, justice could not be accomplished.
While educating the public on the need to use the term ‘survivors’ and not victims, which she noted further debased them, Ojigho lamented that the entire judicial system and the fabric of the nation had failed the survivors.
She stated, “A lot of the laws on rape within the criminal and penal code are what the police are still using to prosecute crimes of rape. Meanwhile, we have a 2015 Violence Against Persons Prosecution Act. The challenge with that Act is that when it was passed, it was only applicable to the FCT.

“As we speak, about 26 states have now domesticated the VAPP Act. Others are in different stages of adapting it. But even the adaptation at the state level has been inconsistent and has watered down the VAPP.

“So, we need strong to prosecute and deter potential people from carrying out this act. We are making a call to the government to, as a matter of urgency, update the legal system. There has to be a human rights upgrade.”

“Rape and other SGBV are greatly underreported. So, even the figure I’m giving is just a little. The NHRC said that in 2020, it received 11,200 cases of rape in Nigeria. But they have not shown the number that was prosecuted,” she added.