Ariana Grande thought that she was getting into the Japanese mode when she supposedly inked a Japanese inscription of “7 Rings” tattoo.

The singer tattooed on her hand “七輪” and showed it to her fans on Instagram and this was a proud moment for her until fans pointed out that it when translated to the Japanese Kanji, it means “shichirin,” a small barbecue grill, not “7 Rings” as she originally thought. 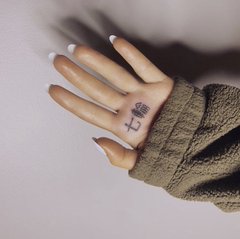 Although she later deleted the post, that did not stop people from talking about it:

Imagine getting bbq grill tattooed on your palm

for those who are confused, ariana grande got a tattoo on her hand in japanese intended to spell out “7 rings” and posted it on instagram (now deleted), but japanese people in the comments started saying how the REAL translation is bbq grill pic.twitter.com/rF0NvEa9Yv