Home Crime Bamise: Another Passenger Narrates How She ‘Escaped Being Raped’ By BRT Driver

Onyinyechi Anoke, a medical doctor, has narrated how she escaped an alleged attempted raped by Andrew Nice, driver of the BRT bus boarded by Bamise Ayanwola, the late 22-year-old fashion designer.

Onyinyechi said her encounter with Nice came during a one-week visit to Lagos in December 2021.

The medical doctor narrated that she boarded a BRT bus driven by Nice at Rasco bus stop axis along Ikorodu road for her destination in Ketu around 7:30pm on December 29, 2021.

In a Facebook post published on Wednesday, the medical doctor, who is in her late 20s, said she was returning from a friend’s house on the day she had an encounter with the BRT driver.

Anoke said she tried booking Uber, a mobility service provider, for a trip back to her destination in Ketu but the booking was not successful because the drivers were far from her destination.

She added she and her friend who escorted her to the bus stop decided to opt for a commercial bus instead and after some time of waiting a BRT bus arrived, and she boarded.

During the trip, she said she observed that the driver did not follow the special lane meant for BRT buses but instead decided to follow the normal lane.

She said the BRT bus driver did not pick up any passenger in subsequent bus stops.

According to her, she began to sense danger when the bus driver began to ask questions about her personal details while also making love advances.

“He (referring to Andrew) talked about spending the night with him, and all the nonsense, but I politely deflected with the excuse that I’ve already stayed out much later than agreed and my parents were calling me, but that I could see him the next day, or even spend the entire weekend (weekend I would already be in Asaba ),” she wrote on Facebook.

“It’s actually not funny. From the conversation he said his name was Andrew, he doesn’t usually ply that route, that he’s more on the Island, and lives in Shagamu and would most likely not see me again, that I’m scamming him.

“By this time, he had gotten to the next bus stop, still refused to pick anybody, instead moved ahead a bit and parked, and put out the bus lights. There was stark darkness within, though the street lights illuminated the surroundings so I could see people but no one could see me.

“How do I signal these passers-by for help? Everywhere was still tightly locked in all of this so all conversations were contained within. He said we should move to the back row and talk better.

“My body language kept speaking unease, and I kept looking at my wrist watch signalling to him that I was late and we could meet earlier the next day, anywhere he wanted and talk as long as he wanted.

“By this time, he had already collected my phone numbers (yeah, he ensured to collect the 2 lines he saw on my phone, dialed both to ensure I wasn’t giving him wrong numbers and saw them ring). As earlier said, my best bet at safety was to go with the flow, while strategizing for better options, and so I did.

“Baba dragged me by the hands, and as usual I didn’t struggle but followed him to the back row. By now it was established in my head that this is most likely going to end as an attempted but failed rape case (I didn’t even think for a second that it was going to be successful.

“My fight response was on a high and I racked my brain for all the possible things I could do to temporarily subdue him and be hitting the bus till people from outside noticed me.

“I’d had 3 such previous attempts in younger years and God somehow always helped me escape untouched from those locked rooms so he wouldn’t allow this infidel to do this now. I would rather die than let it happen (though the picture in my head was more of me harming him with his weapon if he brought out any).

“I had a feeling he might stab me and I kept looking out for any attempts of him bringing out a pocket knife and how I was going to struggle for and collect it (blame too much crime and thriller novels).

“As he made to run his hands on my body indiscriminately (Ewww), I subtly pushed him away, curled into myself and used my elbow as a wedge. He flared up, saying if I said I liked him just like he liked me, why am I resisting.

“I told him I’m just anxious to get home already that’s why, not because I didn’t like him. He just kept acting weird and looking outside to one direction most of the time. Guess he was looking out for someone or something.

“After a while, he got frustrated and moved back to his driver seat and continued the journey. As he just moved, my mom’s call came in coincidentally, and I ensured to put it on speaker, tell her which bus stop we just left and that I would be home in about 5 minutes.

“He drove in silence for the rest of the trip until we got to my bus stop and he opened the door and decided to pick passengers.”

Onyinyechi also shared a screenshot showing she had a call history with the BRT bus driver on December 29, 2021. 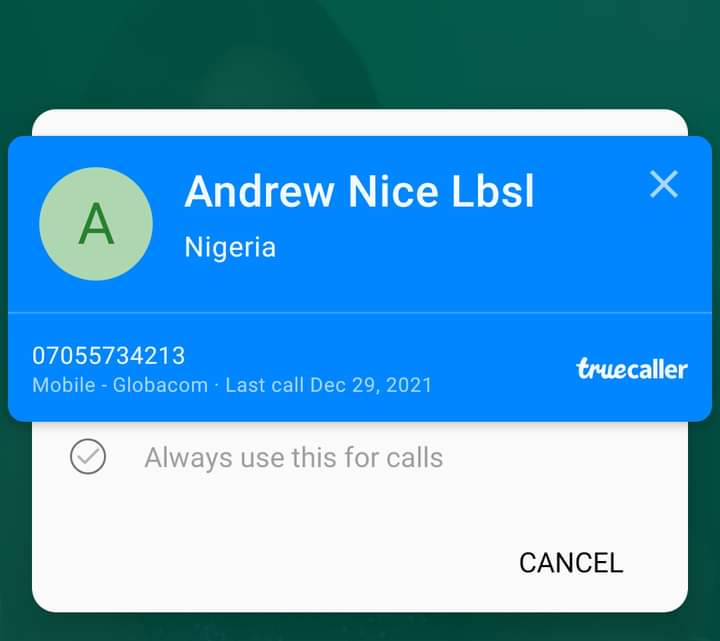 Obasanjo: We Need A Leader Who Is Mad About Nigeria

Oyo Governor, Makinde Gifts 7 Vehicles To Judges, Says ‘They Are Brand New And Not Manufactured In Nigeria’