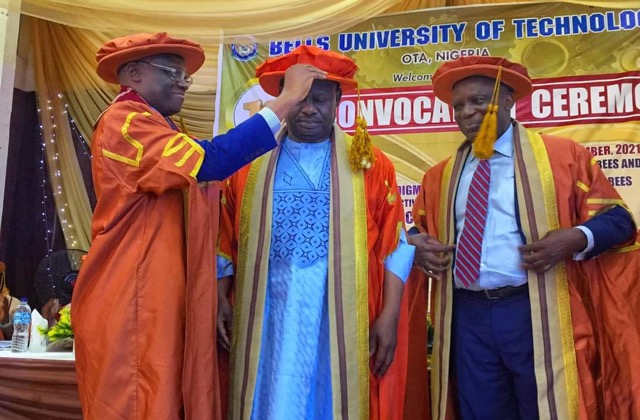 A former Governor of Gombe State, Dr Ibrahim Dankwambo has been appointed as the 3rd chancellor of Bells University.

Dankwambo who is also a former Accountant-General of Nigeria was governor of Gombe State from 2011 – 2019, before losing his senatorial bid to run for Gombe North in the National Assembly.

In a Facebook post on his verified account, the former governor announced his appointment, while expressing gratitude to the former president of Nigeria and proprietor of the institution Olusegun Obasanjo for finding him worthy for the esteemed position as he promised to give his best.

Dankwambo said, “I have just been appointed as the Chancellor of the Bells University of Technology, Ota, Ogun State. I want to sincerely thank my boss, former President Olusegun Obasanjo and the management of the University for finding me worthy of being installed as the third chancellor of the institution.

“I promise to use my wealth of experience to take the University to greater heights. A big congratulations to all the stakeholders, parents and guardians. I wish all the graduands, the very best in their future endeavours.”

Also, the recently appointed Chancellor of Bells University has MSc. in Economics from the University of Lagos and a doctorate in Accounting from the Igbinedion University, Okada.