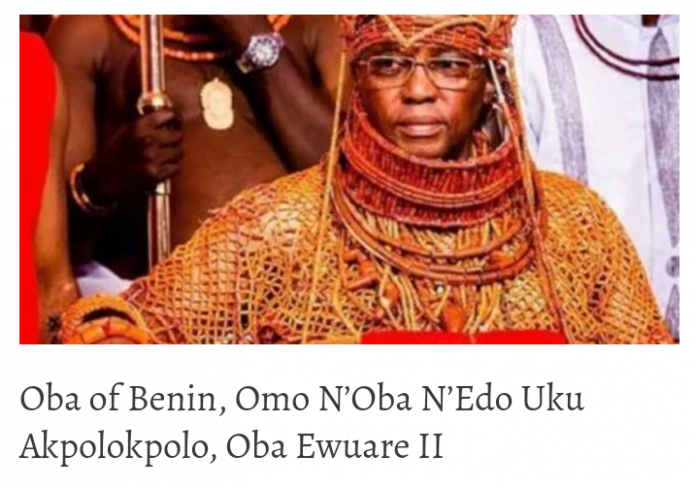 The Oba of Benin, Oba Ewuare II, on Monday signed documents preceding the return of the two looted artefacts that were recently returned by the British Government to the country.

The artefacts, with others expected to arrive in Nigeria soon, were looted about 124 years ago.

At a ceremony at the palace, the traditional ruler and those involved in the process signed the necessary documents in line with the British laws regarding return of artefacts.

The objects would at a later day be handed over to the monarch by the Federal Government.

To safeguard the artworks and others expected to be returned in future, Oba Ewuare II announced Prof Wole Soyinka as a member of the Board of Trustees of the Benin Royal Museum where the returned artefacts would be kept and be opened to the public, including researchers and scientists.

He listed Aghatise Erediauwa, Nduka Obaigbena, Aigboje Aig-Imoukhuede, Ifueko Omoigui-Okauru amongst others, as members of the board of trustees for the museum.

Oba Ewaure II who commended the role played by the Federal Government in the return of the artefacts, said Benin art and culture reflect the past and present glory as well as splendour of the kingdom.
He said, “As our treasures are returned, our youths will be able to establish a new relationship with the heritage bequeathed by their forefathers.

“The return of all the treasures taken away will begin a new era of Benin history and civilisation. International best practice and the rule of law dictate that restitution and compensation are the new discourse.

“We ask that friendly countries seeking to return our artefacts should do so directly to the Oba of Benin or to the Federal Government who will hold them in trust and return the same to the Palace of the Oba of Benin Kingdom as was recently done in Cambridge and Aberdeen,” he added.