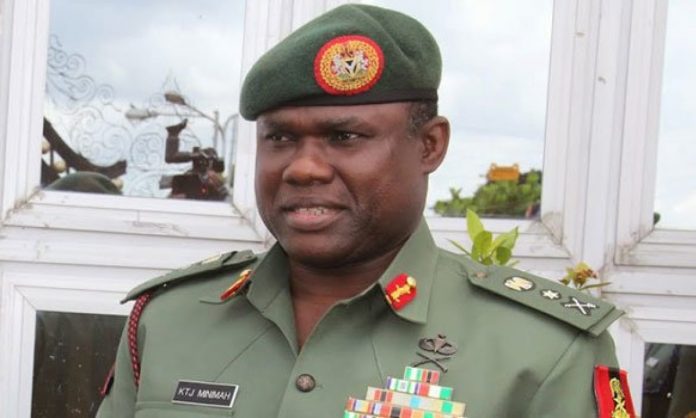 A former Chief of Army Staff, Lt. Gen. Kenneth Minimah (retd), has been charged by the Economic and Financial Crimes Commission (EFCC) for allegedly diverting N13billion earmarked to acquire arms.

Others listed as defendants in the charge filed by the anti-graft agency lodged before a High Court of the Federal Capital Territory, FCT, are a one-time Chief of Accounts and Budget of the Nigerian Army, Maj. Gen. A. O. Adetayo, as well as the former Director, Finance and Accounts of the Nigerian Army, Brigadier Gen. R. I. Odi.

According to the Vanguard, EFCC, in its processes filed in court, stated it had on August 15, 2016, received a report by the Committee on the Audit of Defence Equipment Procurement in the Nigerian Armed Forces (CADEP) from 2007- 2015, chaired by AVM Jon Ode (rtd).

It disclosed in the report, alleged that between 2010 and 2015, “several billions of Naira were received by the Nigerian Army from the Federal Government for procurement of Military hard-wares and were discovered to have been misappropriated by Senior Army Officers.”

The anti-graft agency told the court that during the investigation conducted, “it was revealed that the sum of N13,798,619,309 was misappropriated by the following persons: Lt. Gen. KTJ Minimah (rtd), the former Chief of Army Staff, Maj. Gen. A.O Adetayo, one-time Chief of Accounts and Budget, Nigerian Army and then Colonel R.I Odi, former Director, Finance and Accounts, Nigerian Army.

“This caused huge loss to the Nigerian Army and the Federal Government of Nigeria through the unlawful gains made by the aforementioned Officers who converted the monies for their personal use.

“The legal advice on the investigation opined that a prima facie case has been sustained against the officers,” EFCC added.

Consequently, EFCC, said it wrote the Nigerian Army, requesting the three officers to make themselves available for the arraignment it said should have taken place since September 15, 2020.

Meanwhile, the Federal High Court in Abuja fixed December 9, to hear a suit the three defendants filed to challenge the legal propriety of the charge against them.

The defendants, through their team of lawyers led by Mr. Mahmud Magaji, SAN, are praying the court to determine;

“Whether in view of Section 270 of the Armed Forces Act, Cap A20, laws of the Federation of Nigeria, 2004, the Economic and Financial Crimes Commission (the 2nd Defendant) or any other prosecuting agency can Iawfully investigate, charge, arraign and/or prosecute the Plaintiffs.

Cited as Defendants in the suit are; the Attorney-General of the Federation and Minister of Justice, and the EFCC.

Meantime, the court gave all the parties 21 days to file their pleadings, even as it okayed the matter for hearing.