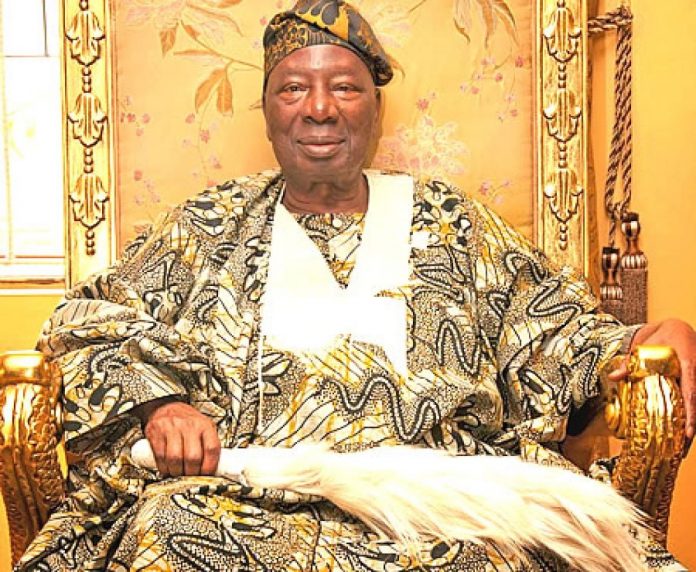 The President, Major General Muhammadu Buhari (retd.); former Vice President Atiku Abubakar; a national leader of the All Progressives Congress, Asiwaju Bola Tinubu; and Ondo State Governor, Rotimi Akderedolu, were among prominent Nigerians who on Sunday mourned the Soun of Ogbomoso, Oba Oladunni Oyewumi, who died in the early hours of the day.

The Gbagun Ruling House of Ogbomoso on Sunday formally announced the death of Oyewumi in a statement by Dr Aderemi Oyewumi.

The statement read, “With total submission to the will of Almighty God and on behalf of Gbagun Ruling House, we announce the death of our father, His Royal Majesty, Oba Dr. Oladunni Oyewumi Ajagungbade III, Soun of Ogbomosoland, who passed away in the early hours of Sunday, December 12, 2021, marking the end of 48 years of a glorious reign.

The monarch was buried according to Islamic rites at about 4.30pm inside a vault in the palace on Sunday.

The burial prayer was conducted by the Chief Imam of Ogbomoso, Tholiat Ayilara.

Dignitaries have continued to throng the palace since the news of the death of the monarch filtered into the town.

Some of the dignitaries who visited the palace to commiserate with the children of the late monarch includde former Governor Adebayo Alao-Akala who is an indigene of the town.

Buhari, in a statement by his Special Adviser on Media and Publicity, Femi Adesina, titled ‘President Buhari mourns Soun of Ogbomosoland,’ said the 48-year reign of the late monarch reinforced Ogbomoso’s status as a land of peace.

The President commiserated with the government and people of Oyo State and especially the indigenes of Ogbomoso.

Buhari also joined the Oyo State Council of Obas in mourning the first class traditional ruler who, according to him, will forever be remembered for his counsel and commitment to the unity and harmony within their ranks.

He, therefore, urged sons and daughters of Ogbomoso to be consoled with the fact that Oyewumi accentuated his reign with the development and progress of the community through enduring peace and extension of hands of fellowship to peoples of other lands.

Also, Atiku has expressed sadness over the death of the monarch.

The former Vice President, in a statement by his media office on Sunday, said the news of the monarch’s death came with a rude shock, even when he died at the ripe age of 95.

Tinubu, in a statement by his media office, commiserated with Oyo State Governor, Seyi Makinde, the people of Ogbomoso and the immediate family of the monarch.

He described Oyewumi as traditional ruler who worked for peace, unity and development in Ogbomoso, Yorubaland and indeed in Nigeria.

“Bolstered by his business background, Kabiyesi had a deep passion for growth and development in Ogbomoso. It was therefore no surprise that commercial and business activities blossomed in the city during his time on the throne.

Also, the Speaker of the Oyo State House of Assembly, Adebo Ogundoyin, described the late monarch as one of the most successful traditional rulers in the South-West.

The Chairman of the Nigerian Communications Commission, Prof. Adeolu Akande, in a statement, commiserated with all sons and daughters of Ogbomoso over the death of the monarch,

He described the transition of the traditional ruler as a monumental loss to the people of Ogbomoso and the state as a whole.

He said, “The death of a first class monarch like Oba Oyewumi is not just a loss to the family and the entire sons and daughters of Ogbomoso, but an irreparable loss to Oyo state.

“He was one of the very few monarchs who had reigned for very long years on the throne of their forefathers. His reign had witnessed landmark achievements in Ogbomoso and its environ.

“The demise of Oba Ajagungbade III on a date we would have celebrated his 48th years coronation is, to me, very sad and unfortunate. I pray Allah accept his return and grant him eternal rest.”