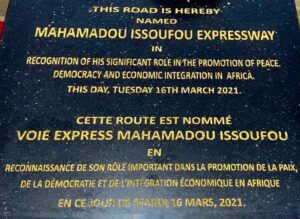 Issoufou who tweeted the development via his verified tweeter account @IssoufouMhn wrote “My brother and friend, President Muhammadu Buhari did me the honor to call an Abuja express way ”Mahamadou Issoufou expressway”.

“This testifies, beyond our personal relations, to the excellent relations that exist between #Nigeria and #Niger. His caring touches me. I thank him very much.

President Buhari on Tuesday congratulated him for successful completion of his second tenure, and wining the prestigious 2020 Mo Ibrahim prize for Achievement in African Leadership, describing him as a worthy African leader.

He felicitated with the outgoing leader for upholding the tenets of democracy, improving the economy of his country and consolidating the good relations that existed between both countries.

He said the emergence of President Issoufou in 2011 marked a watershed in the relationship between the two countries as the frontier of cooperation expanded and mutual trust further strengthened, while congratulating the President-elect, Mohamed Bazoum, for winning the elections. 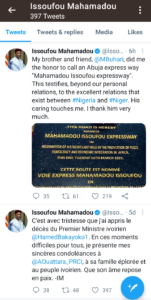