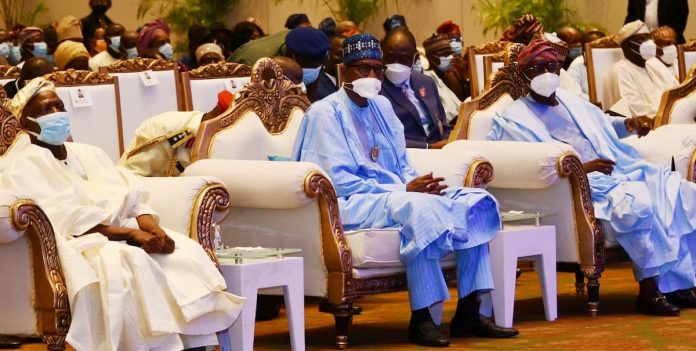 President Muhammadu Buhari has been criticised over his presence at a book launch, some hours after bandits sent a wave of shock from Sokoto.

Although killings are fast becoming daily occurrences, the burning of passengers by bandits in Sokoto shook the nation.

The victims, who were seasonal migrants, were reportedly heading for Kaduna, ahead of their trips to the Southern part of the country.

However, they were burnt to death at Gidan Bawa village in Sabon Birni Local Government Area of Sokoto State.

In its reaction, the Christian Association of Nigeria (CAN) said the gruesome murder of innocent travellers showed that “human life is cheaper than that of chickens in today’s Nigeria”, Daily Trust confirmed.

Buhari had condoled with the families of the victims, saying the dastardly act showed that the evil his administration was confronting required the support and involvement of all Nigerians.

“I am very distressed at the manner of death visited on these hapless citizens who were undertaking a legitimate journey to another part of the country,” he had said in a statement which Femi Adesina, his spokesman, issued on his behalf.

But hours after the incident, the president visited Lagos where he inaugurated some vessels exclusively built by Nigerian Navy engineers and he also attended a book launch.

One of the commissioned vessels

Buhari was the Special Guest of Honour at the launch of “My Participations”, the biography of Chief Bisi Akande, former interim Chairman of the All Progressives Congress (APC).

Pictures of the event were posted on social media but few minutes after the post, thousands of social media users bombarded the president with comments.

One Ibrahim Tunde Opeola wrote: “Buhari going to political party gigs to launch books in Lagos at a time bandits roasted people in Sokoto without a single visit is at the same level with GEJ going to dance in Kano a day after bombs killed people in Nyanya bus stop…it is the height of irresponsibility as a leader.”

Leena Amir Ahmad”, also a Facebook user, said, “Wow! It gave you immense pleasure? You are a cold-hearted leader, Sir. You have failed Nigerians, woefully!”

Abdulrazaq Namadi Liman said, “Very unfortunate! Buhari u will face consequences from Northerners we believe our prayers will not go for that, our people are being killed, kidnapped,  raped, burned to ash on daily basics and u are here writing some stupidity without even concentrating with us. #SecureNorth #NorthIsBleeding”

Buhari exchanging pleasantries with Akande at the book launch

Hadiza Aliyu said, “You have a good heart ur Excellency my mentor! The great PMB federal republic of  Nigeria! Almighty Allah is aware of what you are doing to curb the insecurity situation in Nigeria, do ur own best and leave the rest to Almighty Allah as He is in total control of everything.”

Ayuba Ahmad Lawal said, “After Almost 42 Persons Were killed brutality By bandits but, u are in Lagos to celebrating Akande’s book.”

Collins Everbliss said, “General Muhammadu Buhari you have failed in your responsibility. Shame to you Mr Globetrotter. You represent nothing but mayhem and disappointment.”

Khalid Ibrahim Angale said, “Mr. President Sir with all due respect, at this mourning period, your journey to Lagos shouldn’t have been a priority. Nigerians have voted for you with the hope that you’ll protect their lives and properties.

“Mr. President i have been your diehard supporter from the scratch, i have always supported and defended you, i have never lost hope in you but this time around Sir you’re giving me no hope because things kept happening, our people are being killed everyday and all we here is audio warning and assurances that has never yielded any positive outcome.

“You still have time to earn the confidence of Nigerians by standing to do the right thing, otherwise history will remember you and your government as a change from bad to worse. I pray that The Almighty give you the courage, strength, wisdom and foresight to address our security challenges, revive our economy and consolidate on the gains of democracy.”

One Bamgboye Adeniyi Emmanuel, wax comical by saying, “The book wey him no go read😒”

Amid the heavy bashing, a few supporters of the president stood out, saying he shouldn’t take the heat for all the problems in the country.

Comrade Abdulwahab A Kwarra said, “May God bless Buhari. Sir, Nigerians are please with your Administration. U are the best president Nigeria ever produced.”

Aliyu Ahmed Sambo Doguru said, “Mr President!! We support you!! We voted for you!! We are still supporting and praying for you!!