Father Andres Arango left his post at the St. Gregory Catholic Church in Phoenix this month after disclosing that he used an ‘incorrect formula’ that invalidated the baptisms. He has previously worked in churches in Brazil and San Diego.

Instead of saying ‘I baptize you’ which invokes the power of God, as required by the Congregation for the Doctrine of the Faith, Arango said ‘we baptize you’ – which refers to the community.

According to the ruling, using the wrong phrasing invalidated all the baptisms Arango had performed since being ordained in 1995 through June 2021. And as a result, this could also invalidate ensuing confirmations and Eucharists. 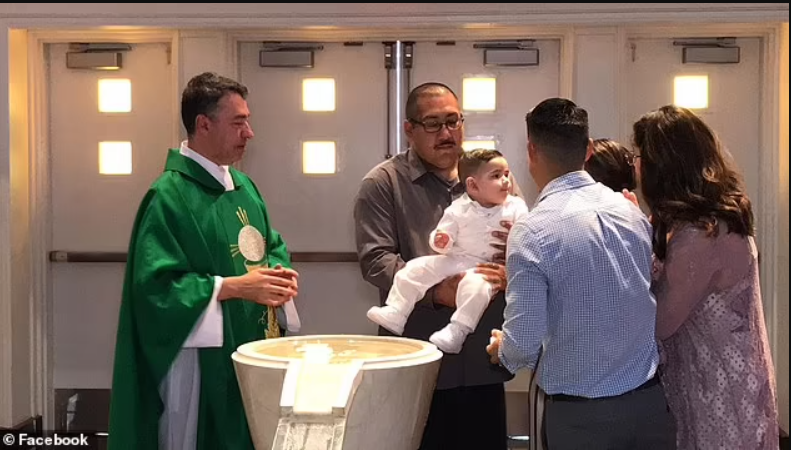 The Roman Catholic Diocese of Phoenix said that it was possible that some marriages could be affected, but did not explain further.

He’ll now work full-time offering spiritual guidance to Catholics whose baptisms were ruled invalid so that he can baptize them again.

The church said the number of invalid baptisms runs into the thousands, but did not reveal exactly how many Arango performed.

The Vatican issued a doctoral note in 2020, clarifying that Baptisms conferred with the formula ‘We baptize you in the name of the Father and the Son of the Holy Spirit,’ were invalid.

Church leaders at The Roman Catholic Diocese investigated its faith leaders after the note was issued, and last month found that Father Arango had incorrectly performed the baptisms. It included baptisms at his previous parishes in Brazil and San Diego.

Following the Vatican’s note of clarification, other priests working in Catholic diocese across the United States realized they had also been improperly baptized by priests.

It was explained that after becoming an ordained priest for the Archdiocese of Oklahoma City in 2020, Father Zachery Boazman reviewed a video of his 1992 baptism and realized the wrong wording had been used.

He was re-ordained following the discovery, the Archdiocese of Oklahoma City said.

In a letter announcing his resignation, Father Arango apologized to those his mistake has affected and asked the community for ‘prayers, forgiveness, and understanding.’

‘It saddens me to learn that I have performed invalid baptisms throughout my ministry as a priest by regularly using an incorrect formula,’ Arango said. ‘I deeply regret my error and how this has affected numerous people in your parish and elsewhere.

‘With the help of the Holy Spirit and in communion, with the Diocese of Phoenix, I will dedicate my energy and full-time ministry to help remedy this and heal those affected.’ 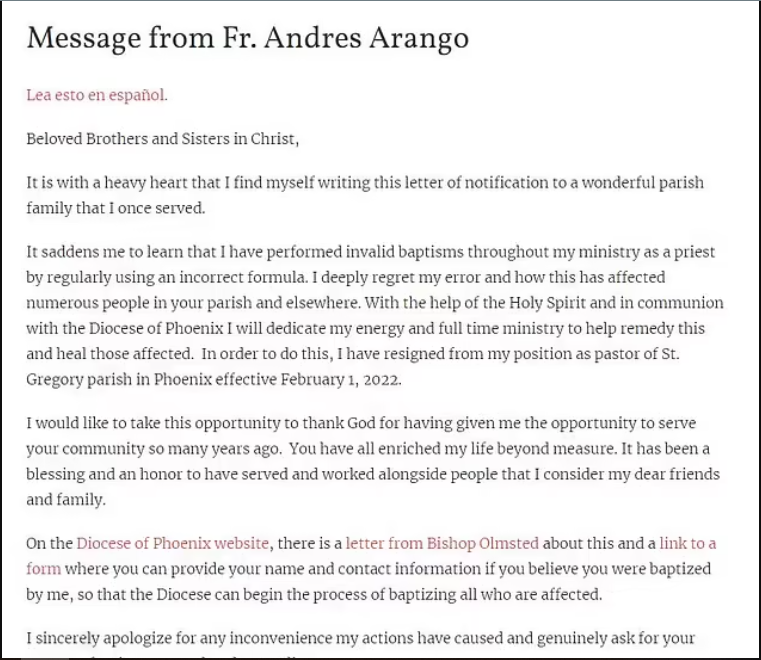 Arango remains a priest in good standing, and the situation has not disqualified him from his vocation and ministry, the Diocese said.

Those whose baptisms were invalid might have to repeat the second and third sacraments – confirmation and Eucharist after receiving a second, valid baptism.

It’s not clear how the situation could impact marriages, but the Diocese said that it could.

‘Maybe!’ it said in a statement. ‘Unfortunately, there is no single clear answer. There are a number of variables when it comes to valid marriages, and the Tribunal is here to help.’

‘On behalf of our local Church, I too am sincerely sorry that this error has resulted in disruption to the sacramental lives of a number of the faithful,’ Olmsted said in a statement.

‘This is why I pledge to take every step necessary to remedy the situation for everyone impacted.’