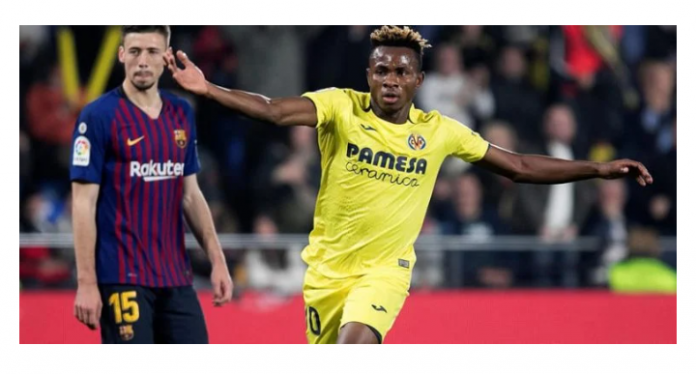 Nigeria international, Samuel Chukwueze, reached a major milestone in his club career after he made 100 La Liga appearances for Villarreal in their 2-0 win over Rayo Vallecano at the Estadio de la Ceramica on Sunday.

Chukwueze was brought in as a substitute for Yeremi Pino in the 62nd minute in what was his ninth league game of the season and also his 100th appearance in the Spanish top-flight.

The Super Eagles forward, who made his first-team debut on September 20, 2018, replacing Nicola Sansone in a 2–2 home draw against Rangers in the UEFA Europa League, played his first league game for the Yellow Submarines on November 5, 2018, in a 1–1 home draw against Levante.

The 22-year-old was a key player for the La Liga club as they claimed the 2020/21 Europa League trophy – though an injury in the semi-finals against Arsenal ruled him out of the final and has played mainly as a substitute this season after recovering from a six-month layoff.

So far this season, Chikwueze has scored one goal in nine league appearances he featured – the goal he scored against Barcelona – the team he has scored the most number of goals against in the Spanish top-flight.

Of the 100 appearances, Chukwueze started 52 of the games, while he came on as a substitute in the other 48 matches.

Meanwhile, the Nigerian in his 100 league appearances Yellow Submarines has scored 13 goals and registered 10 assists.

How Prepared Are The Super Eagles As Hunt For Fourth Continental Glory Kicks Off?

Haknan Mustapha: My Dream Is To Be Named One Of The Best Players In WNBA