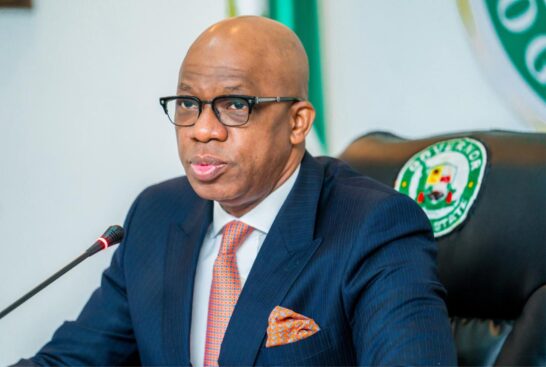 The first class monarch advised the Governor to channel loans taken towards capital projects that would enhance the Internally Generated Revenue in the state.

Adetona spoke shortly before the inauguration of Akarigbo and Paramount Ruler of Remoland, Oba Babatunde Ajayi as the Chairman of the State Traditional Council.

The monarch who is the immediate past chairman of the council, in his remarks, lauded the Governor for his tenacity to generate revenue for the developmental projects in the state .

Awujale’s speech was read by the Permanent Secretary, Ministry of Local Government and Chieftaincy Affairs, Kolawole Fagbohun, at the occasion.

He said, “Similarly, I must commend your Excellency for the tenacity at which various financial obligations of the state government projects are met, considering the dwindling revenue allocation couple with the current reality of national economy.

“There is no gainsaying that there is need for loan … at the time like this,

However , permit me to advise that such loans should not be expended on current expenditure such as payment of salaries , they should be invested in infrastructure that will further boost the economic activities in the state.”

Awujale, however, accused the Governor of concentrating developmental projects in Abeokuta, the state capital.

Adetona said he had observed that Abeokuta had attracted more of the infrastructural projects at the detriment of other parts of the state.

He charged the Governor to ensure equitable distribution of projects across the state.

He said, “At this juncture, I wish to appreciate your excellency for the various developmental projects across the state. This undoubtedly is in fulfillment of your promises to the good people of our state and a signal of your resolute commitment towards the development of our dear state.

“However, it has been observed that the state capital appears to have gathered most of the attention of the government in terms of infrastructural development.

“Perhaps, owing to being the seat of governance.

Hence, I wish to appeal for equitable distribution of infrastructure across the state especially at the grassroots.”

In his address, Abiodun applauded traditional rulers for the supports, motivation and feedbacks which he said had enriched the state’s programmes and policies.

The Governor however warned monarchs against “utterances and accusations” capable of disrupting the peace of the state ahead of 2023 elections.

Abiodun also frowned at what he called “culture of violence”, saying, “we won’t allow anybody to undermine peace and security of the State.”

In his acceptance speech, Oba Ajayi promised the continued support of the traditional council to the government towards ensuring peace, security and development of the State.