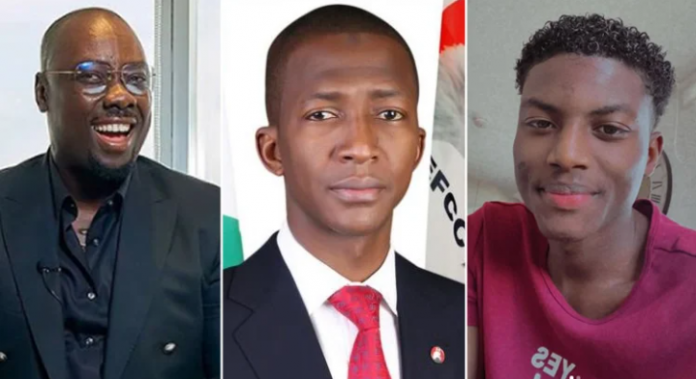 Abba, son of the Director-General of the Department of State Services, Yusuf Bichi, has criticised the Economic and Financial Crimes Commission over the detention of the Chairman of Cubana Group, Obi Iyiegbu, popularly known as Obi Cubana.

The PUNCH had earlier reported that the anti-graft agency detained Cubana on Monday for alleged money laundering and tax fraud.

Abba, a footballer and teenage son of the secret police boss, took to his verified Instagram account, abba__bichi, immediately after the detention of Cubana to declare his support for the businessman.

In the post, Abba uploaded a ravishing photo of a smiling Cubana and captioned it, “A man of honour and dignity”, adding that not every wealthy person is fraudulent.

abba__bichi fired back, “Go and prove that okay, not everyone with money is into fraud, you idiots support politicians with money and find it hard to see any good Nigerian with money! Indeed you are an illiterate of the highest order.”

Another user, @bafanabee, tackled Abba, saying he shouldn’t have declared support for Cubana but the DSS DG’s son replied, “If my father is (DSS DG), so what?”

It was not all knocks for Abba as some users also threw their weight behind him.

“@abba__bichi sad. I just weep when I see some comments. It’s painful to read,” Isokenodigie stated.

Abba then retorted, “@isokenodigie they are politicians puppet that’s why! Imagine a sensible person will choose a politician over a hardworking man! That’s why Nigeria is messed up.”

A top EFCC source told our correspondent that the Anambra-born club owner is still being quizzed at the headquarters of the EFCC at Jabi, Abuja, and has not yet been released as of the time of filing this report on Tuesday.

Cubana became a social media sensation and the rave of the moment in July after the ‘naira rain’ at the burial of his mother in Oba, a town in the Idemili South Local Government Area of Anambra State. Several videos went viral that show celebrities, businesspeople and politicians spray money indiscriminately during a concert held after the interment of the deceased. Scores of cows were also reportedly slaughtered at the event which many had described as ostentatious.

No Going Back On Tuition Increase, Says UNIMED VC