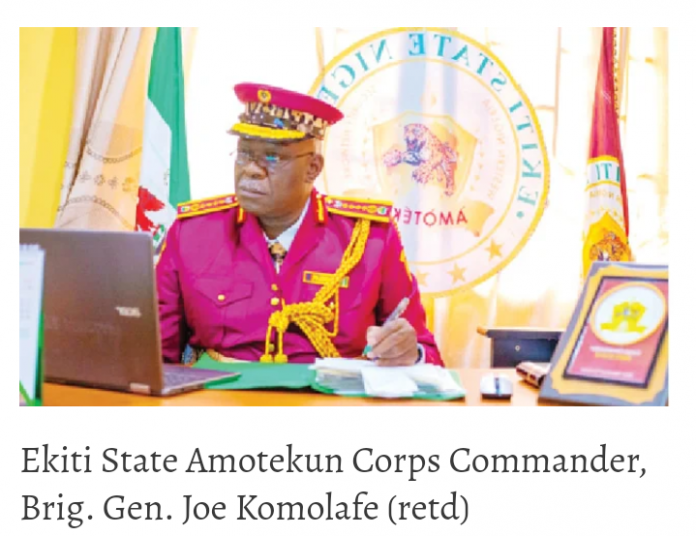 Operatives of the Amotekun Corps in Ekiti State on Monday arrested a 20-year-old man, identified only as Temitope, for allegedly robbing a 65-year-old farmer, Oluwafemi Ilori, of his motorcycle at Ise Ekiti in the Ise-Orun Local Government Area of the state.

Ilori, who bought the motorcycle on Monday, November 22, parked it beside his house at Ise Ekiti two days after, only for the motorcycle to go missing.

The Ekiti State Amotekun Corps Commander, Brig. Gen. Joe Komolafe (retd), who said operatives of the security outfit had been on the trail of the suspect since the incident happened, disclosed that luck ran out on Temitope on Monday as he was caught while eating at Ise Ekiti.

“The motorcycle, which the suspect had tampered with as well, has been recovered. The suspect will be handed over to the police for further investigation and prosecution,” Komolafe added.

Temitope, who confirmed that he was arrested by Amotekun operatives where he was eating, said the motorcycle was given to him by a man on November 25 for commercial purposes.

He said, “I have since been working and delivering N1,500 to the man called Busuyi daily. I do not know anything further about him. I have been giving him daily returns at a hotel. I do not know his house or where he is from. When I was arrested, we went to the hotel, but we could not find him.

“He did not give the keys or the papers of the motorcycle to me. I have means of starting and stopping the engine of the motorcycle. The fuel tank is permanently open in case I want to refuel it since there is no key.”