The Electoral Commission has announced the certified Parliamentary results of the 2020 election across 275 constituencies.

According to a statement issued by the EC on Thursday, December 10, 2020, the New Patriotic Party has won 137 seats in Parliament while the National Democratic Congress has won 136 seats.

One independent candidate has however won a seat in Parliament while one outstanding result is yet to be provided from the Sene West Constituency.

The Ashanti Region gained the most seats with 42 won for the NPP while the NDC gained 20 seats from the Greater Accra Region.

Ghanaians went to the polls on December 7, 2020, for the eighth time since 1992 to elect a President and 275 Members of Parliament as part of a four-year constitutional mandate.

Chairperson of the Electoral Commission Jean Mensa on Wednesday, December 9, announced that Nana Addo Dankwa Akufo-Addo of the New Patriotic Party polled 6,730,413, representing 51.595 percent while John Dramani Mahama of the National Democratic Congress garnered 6,214,889 representing 47.366 percent in the 8th election in the 4th Republic that had 12 candidates.

See the full results by the Electoral Commission below: 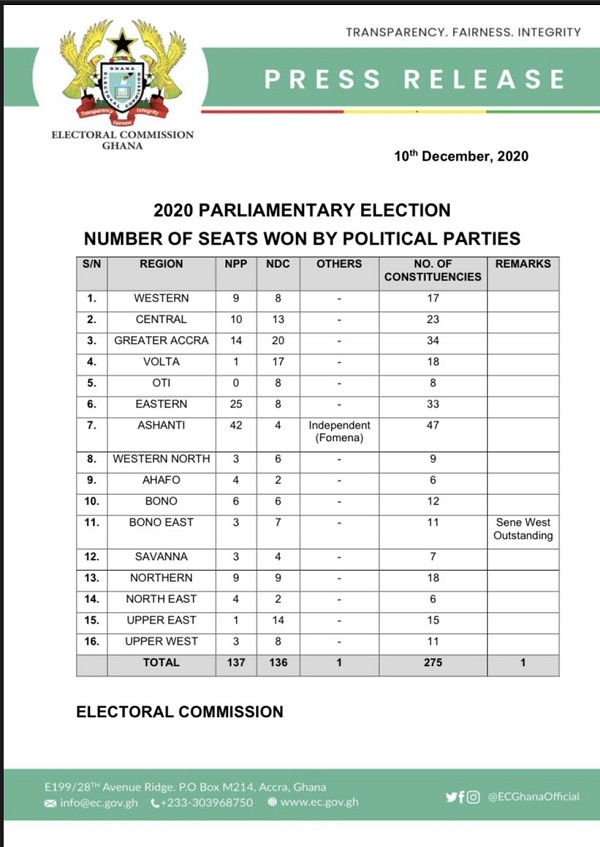 Buhari Celebrates Eid-el-Fitr With Family Members At The Villa

Buhari Celebrates Eid-el-Fitr With Family Members At The Villa