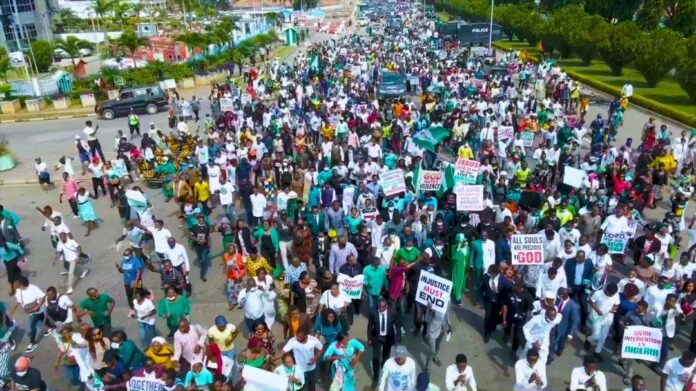 The lawyer to a complainant, I.G. Mdatsadue, in a petition of alleged extra-judicial killing of Simon Aondofa Nyamkwange by the Police has informed the Independent Investigation Panel on Human Rights Violations that the corpse of the deceased is stranded at the Mortuary of General Hospital Wuse, Abuja.

While adopting his written address in respect of the matter, Mdatsadue told the panel that the inability of the deceased family to pay the N407,00 mortuary bill of the deceased has left the corpse stranded in the morgue of General Hospital Wuse, Abuja, even though the panel had ordered the police to ensure the release of the victim’s body.

He said, “The hospital initially gave us a bill of over N1.1m and we had to appeal to the Hospital management to reduce the mortuary bill and they reduced it to N607,000.

“We pleaded further that the N607,000 will not be easy for the family to pay and the Hospital management obliged and gave a discount of N200,000 which now left an outstanding amount of N407,000.”

Mdatsadue further informed the panel that despite the reduction in the mortuary bill, the outstanding charge of N407,00 was yet to be paid and that is why the corpse is still in the mortuary to date.

On the other hand, the Nigerian Police defended the action of Sgt David Moses who admitted that he shot Simon Aondofa Nyamkwange in self-defence at Eterna filling station in Wuse Zone 2, Abuja.

Defending the incident which resulted in the death of Nyamkwange, Police Counsel, Fidelis Ogwobe told the panel chaired by Justice Suleiman Galadima (retd.), that Moses had testified as a witness about his involvement in the matter when he admitted that he shot the deceased in self-defence.

According to him, the use of firearms by police officers is justifiable under the law in the circumstance Sgt Moses found himself being attacked around 1:00 am.Ogwobe cited Section 33 (2a) of the 1999 Constitution which relates to the right to life while in self-defence and in defence of property to support his argument that Sgt Moses action is in line with the law.

The Police lawyer also referred to Force Order 237 of 1990 which he noted justifies the use of firearms by any police officer whose life is in danger in the course of his duties, saying that such a situation is applicable in the circumstances Sgt Moses found himself.

Similarly, he cited Basic Principles 9 and 10 of the use of force and firearm by the law enforcement Officers adopted by the United Nations in 1992 to form part of Police defence in the matter

On the last adjourned date, Sgt Moses had admitted that he shot Simon Aondofa Moses while testifying over a petition filed against the police by the deceased brother, Abraham Nyamkwange.

According to Moses, he had to shoot him when the deceased attempted to snatch his rifle from him in the company of other gang members.

The Police Sergeant had stated that while he was oo p the filling station with his superior, ASP Danjuma Kadiri Ogwu, five men wielding shiny cutlasses scaled the perimeter fence of the filling station and that he shot one of them, Simon Aondofa Nyamkwange who made a futile effort to collect his rifle.

The matter was adjourned for a report of the panel.