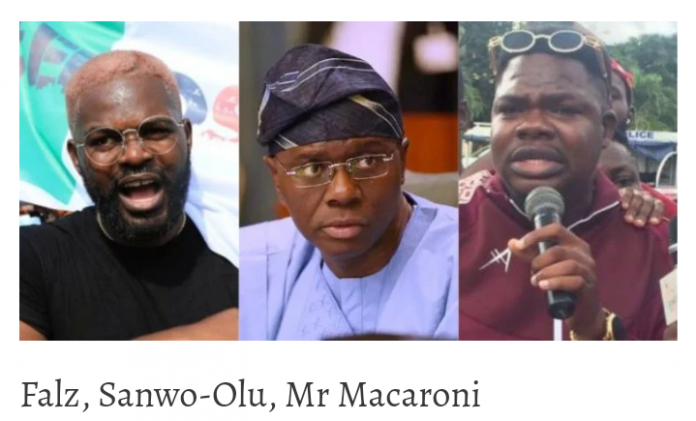 Some EndSARS campaigners including Folarin Falana aka Falz and Debo Adebayo aka Mr Marcaroni have rejected the invite by the Lagos State Governor, Babajide Sanwo-Olu, to a peace walk for “the healing of Lagos” in December.

The governor in a speech on Tuesday on the Lekki shootings of October 20, 2020, said, “In December, I will be leading A WALK FOR PEACE to herald the healing of our land. Let me use this occasion to extend an open invitation to our youths, members of the diplomatic corps, civil society groups, students and the media as well as other stakeholders to join me.”

Sanwo-Olu also said his government will release its White Paper on the report submitted by the EndSARS Judicial Panel of Inquiry on November 15, 2021.

He said, “As an administration, are determined that the next steps that will be taken in this process of coming to terms with the events of October 2020, must bring closure to a painful episode in the history of our state, with the release of the White Paper later today.”

A youth protester, who was also invited by the governor for a walk, Awosanya, lauded Sanwo-Olu for his “leadership”.

@segalink tweeted, “@jidesanwoolu has shown leadership with this matured response and we hope the WhitePaper will mirror his sentiment. We all want closure, Justice and healing for our society. The experience of 20th October 2020 must never be repeated.”
But reacting, the younger Falana, who tweeted via @falzthebahdguy, described the peace walk as a “joke”, insisting that justice must be served for all victims of police brutality.