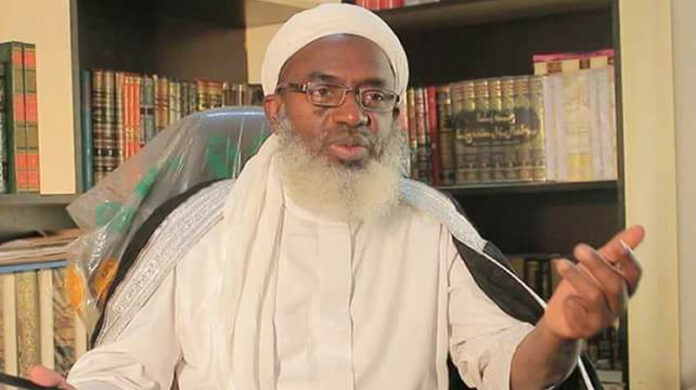 Sheik Ahmad Gumi has asked clerics from the Southern part of the country to engage those behind uprising in the region the same way he does to bandits.

The respected cleric said this in a statement he issued in reactions to the call for bandits to be declared as terrorists.

Last week, Governor Nasir El-Rufai of Kaduna State said since 2017, he had asked the Federal Government to declare bandits as terrorists.

Weighing in on the conversation, Gumi said declaring bandits as terrorists is not the solution to the crisis in the north.

“NE is already and is still devastated by this madness for over 12 years. If we allow, terror, to set in into these raw naïve unexposed bandits, NW will be in ruins sooner than later. Already IPOB is destroying SE, and Igboho has set the ball of confusion rolling in SW. For those who want to destroy the NW, it’s a good recipe. Turn bandits into religious zealots. Tell me, what then remains of Nigeria?”

“I have started to get these raw bandits out of their misadventure but unfortunately, I have few helpers and a mountain of antagonists. The psychology in fighting natives is to induce a motive for their struggle if they don’t have one already, a motive that is manageable, and it is so managed. Unfortunately, reactions to threat in our nation are always slow and incoherent.

“I hope another Igbo clergy goes into the IPOB militants likewise and talk sense into them, and another Pastor of Oduduwa land talks against the Igboho secessionist tribal movement by way of sensitising people to the values of a cohesive nationalism that will guaranty freedom, equality, and justice for all. Religious forces can permeate hardened hearts where secular forces cannot.

“Regrettably, people just sit down in the comfort of their rooms or parlours and make useless passing comments that only add fuel to the inferno of ethnic jingoism and bigotry. In the 21st century, Nigeria is hijacked by semi-illiterates and half-baked tribal heroes that have nothing to offer besides promoting tribal xenophobia. Nigeria has over 250 ethnic groupings, it’s not possible to divide such a nation into tribal enclaves. Nigeria is multi-religious, even with one same religion or sect there is no harmony and understanding that can build a prosperous unified nation where tranquillity and development will flourish. We are tired of these bogus destructive fruitless slogans!

“Nigerians are in a daydream so long they act by nerval impulses, not by the dictates of their cerebral cortex,” he said in a statement