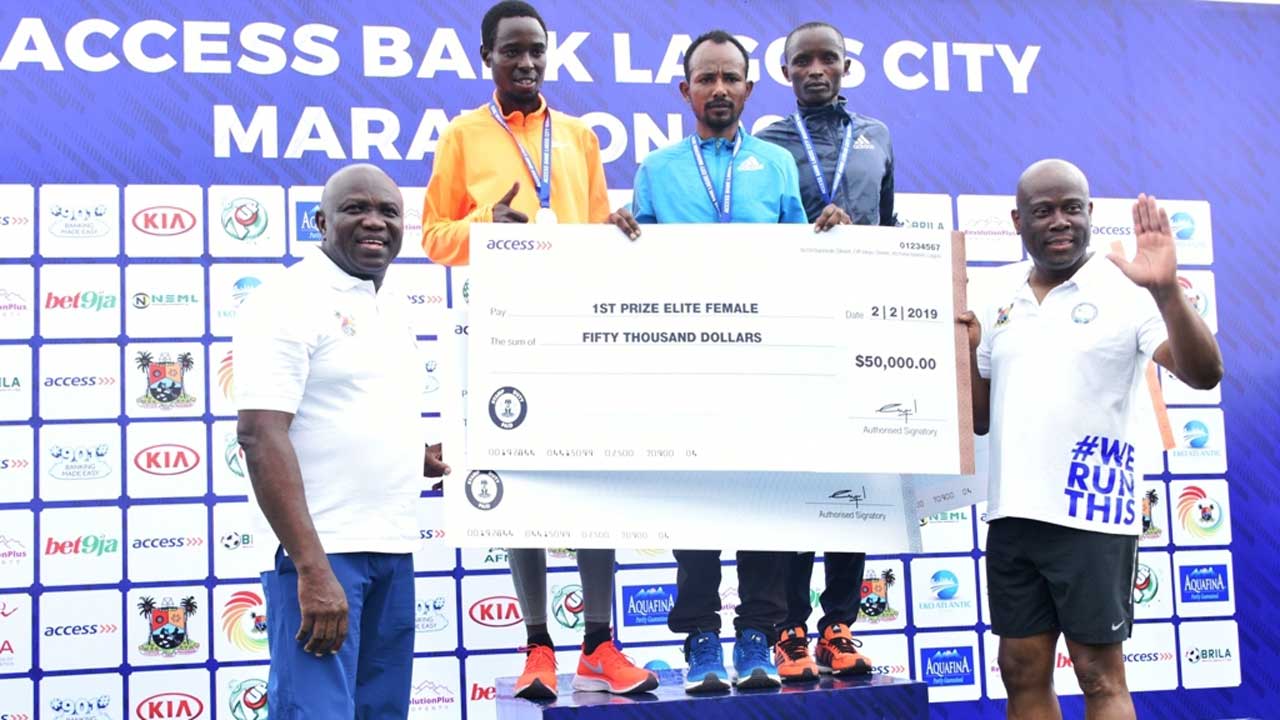 Gideon Goyet was the first Nigerian to cross the finishing line in 2 hours, 30 minutes to win N3 million, beating last year’s champion, Iliya Pam to second place, with a prize money of N2million.However, there was jubilation yesterday at the IAAF Bronze Label marathon as, Pam who many call the queen of long-distance races in Nigeria achieved a historic feat by breaking into the overall top female finishers.

Speaking at the occasion, the Lagos State Governor Akinwunmi Ambode said it was gratifying that the marathon was getting bigger and better yearly, adding that the competition had come to stay.“I want to say a big thank you to all Lagosians for tolerating us in the last four years because this is the fourth time we are doing this Lagos Access Marathon and it has been improving year in, year out. This year, we had 58 countries participating and over 100,000 athletes also taking part in this journey.

“The marathon is part of our administration’s initiative to use sports, tourism, entertainment, arts and culture to promote the excellence of Lagos and positively engage the youth,” Ambode said.Also speaking, the Group Managing Director, Access Bank Plc, Herbert Wigwe, promised bigger support towards encouraging the public in the adoption of a lifestyle that would promote good healthy living.

“Access Bank will ensure this marathon gets better every year, as we target world class outings till we achieve the silver and gold label rating from IAAF. “The brave spirit of the men and women that ran today represents the core value of Access Bank’s journey to becoming Africa’s gateway to the world.

“Our focus is to advance Nigeria’s blossoming drive for health and fitness. We have made it our responsibility to encourage the general public and create value for stakeholders,” Wigwe stated.One of the highlights of yesterday’s marathon race was the donation of N2.5million by Governor Ambode to an upcoming artiste, Johnson David, who was invited by Nigerian hip-hop star, D Banj, to perform on stage from the crowd.