Claim: A viral message titled — Can this be described as mere coincidence? What has the figure 71 got to do with ex-Governors of Oyo State. What an irony? — has been trending on many social media and instant messaging platforms especially Whatsapp.

Verdict: The narrative is PARTLY FALSE.

Social media and instant messaging platforms is awash with a viral message that there is a sort of coincidence with some ex-Oyo Governors and former Justice Minister dying at 71. The bottom line of the message is that 71 is such a significant figure.

Alao-Akala’s death came as a rude shock to many sympathisers and political associates.

Alao-Akala later contested and won the governorship election in 2007 under the platform of the PDP and became Governor from May 29- May 2011.

“Can this be described as mere coincidence? What has the figure 71 got to do with ex-Governors of Oyo State. What an irony? Now read this; 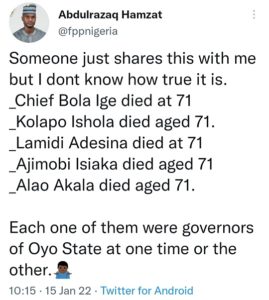 “Each one of them were governors of Oyo State at one time or the other. Am l a pessimist?

On WhatsApp, many ignorantly shared and shared the message on groups, and to individual contacts as this is indicated with the “forwarded many times” tag on the viral message.

Some handles also tweeted and retweeted the viral message on Twitter.

Several Facebook users also shared the posts on their timelines. 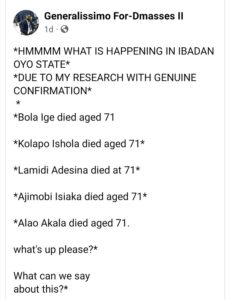 To ascertain the veracity of the now-viral message, this correspondent sought after the biographies of the ex-Governors and former Justice Minister Ige. Also, news reports from credible outlets provided the right information about their various age before their deaths.

Checks by our correspondent revealed the following facts:

Former Governor Abiola Ajimobi was 70 when he died in June 2020.

The now-viral narrative trending on social media platforms that Ex-governors Kolapo Ishola, Lamidi Adesina, Abiola Ajimobi, Adebayo Alao-Akala and Bola Ige all died at the age of 71 is partly false.

Democracy Without Democrats, Leadership Without Honor

Mr President, You Owe Tinubu More Than This….