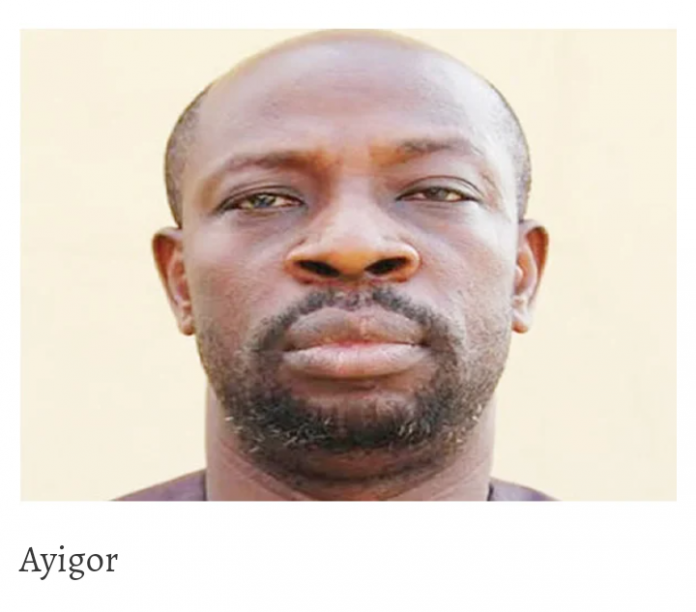 The court, presided over by Justice A. T. Mohammed, found Ayigor guilty of defrauding an American, Joseph Crews, of the sum of $629,287 in a crude oil supply scam.

The Economic and Financial Crimes Commission, in a statement by its spokesman, Wilson Uwujaren, said he was jailed on Wednesday, December 8, 2021.

He noted that Ayigor was arraigned alongside his company, Vanyigor Concepts Limited, before Justice M. A. Liman of the Federal High Court sitting in Port Harcourt by the Port Harcourt Zonal Command of the agency.

According to him, the convict was charged with 25 counts bordering on conspiracy, uttering, forgery and obtaining money by false pretences.

One of the counts read, “That you, Dr Vincent Anyigor, Vanyigor Concepts Limited and others at large, on or about the 15th day of October, 2010, at Port Harcourt, Rivers State, within the jurisdiction of this honourable court, with intent to defraud, obtained a sum of $243,000.00 only from one Joseph I. Crews, an American citizen, and his company, Aumenta Holdings Inc DBA AHI Commercial Finding Group, as part payment of the cost price for the logistics to supply them six million barrels of Bonny Light Crude Oil, which you claimed to have the capability to deliver to them, thereby committing an offence contrary to Section 1(1)(b) of the Advance Fee Fraud and Other Fraud Related Offences Act 2006 and punishable under Section 1(3) of the same Act.”

Ayigor pleaded not guilty to the charges, leading to a full trial that lasted five years.
The EFCC’s counsel, I. Agu, called eight witnesses in the course of the trial and tendered documents that eventually nailed the convict.

In his judgment, Justice Liman found Ayigor guilty of all the 25 charges.

He convicted and sentenced him to seven years’ imprisonment on each of the counts, totalling 175 years, which would run concurrently from the date of his arrest.

In addition, the court ordered the convict and his company to pay the sum of $629,267 as restitution to the victim, Joseph Crews and Aumenta Holdings Inc of the United States of America.
He also ordered that Vanyigor Concepts Limited be folded up.

The statement said Ayigor commenced his journey to prison when Crews petitioned the EFCC that the convict collected the sum of $629,287.00 from him for the supply of crude oil without delivering the product or returning his money to him.

Investigations by the EFCC showed that Ayigor was the leader of a syndicate scamming foreigners by parading itself as an international operator in the oil and gas sector.

He was plying his fraudulent trade by forging documents and transacting businesses bearing the name of the Nigerian National Petroleum Corporation.