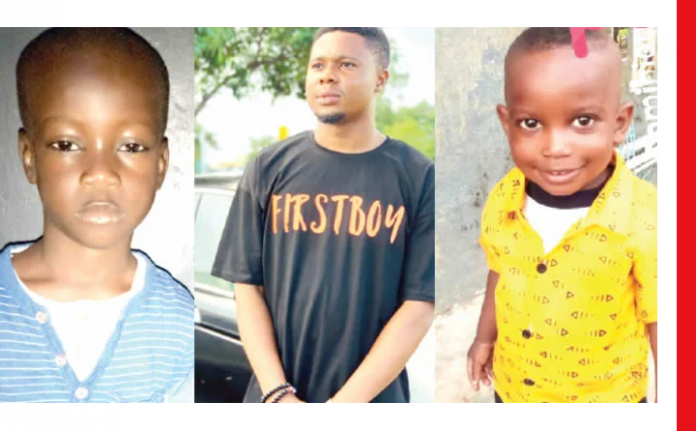 Parents of two children, Daniel Mudashiru, two, and five-year-old Qozeem Ayinde are currently worried over their whereabouts since November 28 and December 30, 2021 respectively.

This is just as the family of a phone repairer, Emmanuel David, was thrown into distress over the disappearance of the 23-year-old on Sunday, January 2.

City Round learnt that Mudashiru was playing with his peers outside his parents’ residence on Olayinka Street, in the Ajegunle area of Lagos when he went missing.

His mother, Mercy, told our correspondent she was inside on that day, stating that neither his playmates nor her neighbours could explain his whereabouts.

She said, “He was playing with other children outside when I went inside. About 25 minutes later, I noticed that I didn’t hear his voice again and came out but I didn’t see him. His playmates said they left him outside and went back to meet their parents.

“I looked everywhere but I didn’t see him. My neighbours also said they didn’t know his whereabouts. We reported the case at the Ajeromi Police Station. The police said they are still investigating. My husband and I have become worried since then. We are always concerned about his fate.”

It was learnt that Ayinde went missing during a commotion caused by a cult fight in the Ijora Badia area of the state on December 30.

His stepfather, Abdulafeez Owolabi, said the boy was in front of his mother’s shop on Church Street when the confusion ensued.

Owolabi stated, “A day before he went missing, there was a cult clash on Amosun Street, Badia. The following day, around 7pm, those boys started again and everybody ran helter-skelter. He was in front of his mother’s shop on Church Street. When the commotion calmed 20 minutes later, we couldn’t find him.

“We looked for him till 12am. Some people urged us to be patient till the following day that somebody might have taken him to safe custody. We couldn’t sleep throughout the night.

“I went to Amuko and Orile police stations to make reports. Till now, we have not found him. We are praying to God to let him return safely. No one knew I wasn’t his father until the incident happened.”

Our correspondent learnt that David, a mobile phone repairer, his elder sister, Jeamine, and three other family members, had visited an amusement park at Akowonjo on January 2 and were returning home when he went missing.

Jeamine told Sunday PUNCH that they could not get motorcycles back home at the same time and Emmanuel was left behind, adding that they were nervous when his line indicated it was switched off.

She said, “We went out as a family to the park at Akowonjo that Sunday. We got there around 10pm and left around 11pm. We were five and took bikes back home. He was the last person at the bus stop. When we got home, we called him and asked him where he was. He said he was still looking for a bike.

Five minutes after, we called him again to know if he had got a bike but his number was not reachable. We assumed it was a network problem. We tried the number again and it was switched off. Everybody was in fear.

“We reported at the Gowon Estate Police Station and wrote statements. I also visited other police stations around the area but they said he was not in their custody. He repairs phones. He never told me he had any misunderstanding with anyone.”

The state Spokesperson in the state, CSP Adekunle Ajisebutu, promised to get back to our correspondent with updates on the three cases but had yet to do so as of the time of filing this report.

Families Worry Over Whereabouts Of Two Kid Of Phone Repairer In...

Dad Seeks Help For Daughter Forced Out Of School By Broken...

What I Do Before Agreeing To Kiss In Movies —Queeneth Agbor