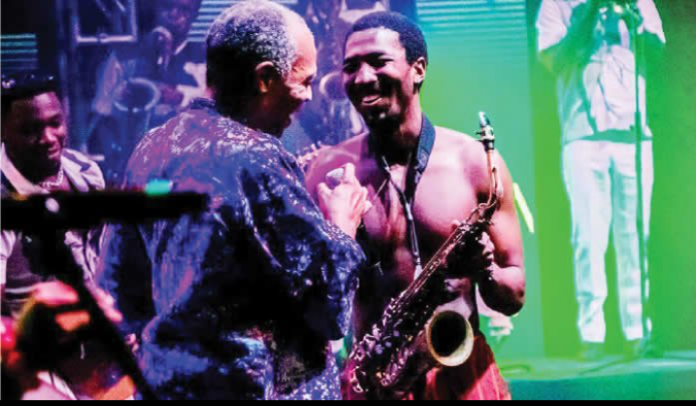 Made, the first grandson of afrobeat legend, Fela Anikulapo-Kuti, recently gave his parents, Femi and Funke Kuti, reasons to be proud as he gave a superlative two-hour performance at his second concert on Friday, October 29, 2021, in Lagos.

Collaborating with highlife bands, The Bandhitz and The Cavemen, Made gave such a sterling performance that his father, Femi, admitted he had come of age and was ready to take over the world. He said, “His performance was electrifying and on point, I couldn’t be more proud.”

His mother, Funke, also noted that the night was an amazing one, agreeing with Femi on Made’s sounds, breath control, style and dexterity. She said, “You ‘killed’ the show. (I’m) so proud of you, my darling.”

Made and his band, The Movement, alongside The Bandhitz and The Cavemen thrilled guests with a blend of afrobeat and highlife. Performing songs from his debut album ‘For(e)ward’ which include ‘Free Your Mind’, ‘Your Enemy’, ‘Blood’, ‘Different Streets’, ‘Higher’, ‘You’ll Find’, and ‘Hymn’, as well as some unreleased songs, Made held guests spellbound.

The rising afrobeat musician has no doubt come of age and is undoubtedly ready to take over the music scene.

The concert, which was anchored by comedian, Omo Baba, and his protégé, Kojah Kaze, was enjoyed by guests including Yeni Kuti, Funlola Aofiyebi-Raimi and Edi Lawani.

The show was packaged by FK Management with support from Trophy Stout, Lagos Inland Revenue Service and Soundicty.

Meanwhile, Made got his first award nomination at the All Africa Music Awards in the African Jazz category.

It would be recalled that in July 2021, Made gave fans a memorable musical experience at the debut of Made Kuti at The Movement at Terra Kulture, Victoria Island, Lagos.

I Love Wizkid, That’s Not Going To Change – Tems

Ini Edo Confirms Surrogacy Rumours, Opens Up About Past Miscarriages