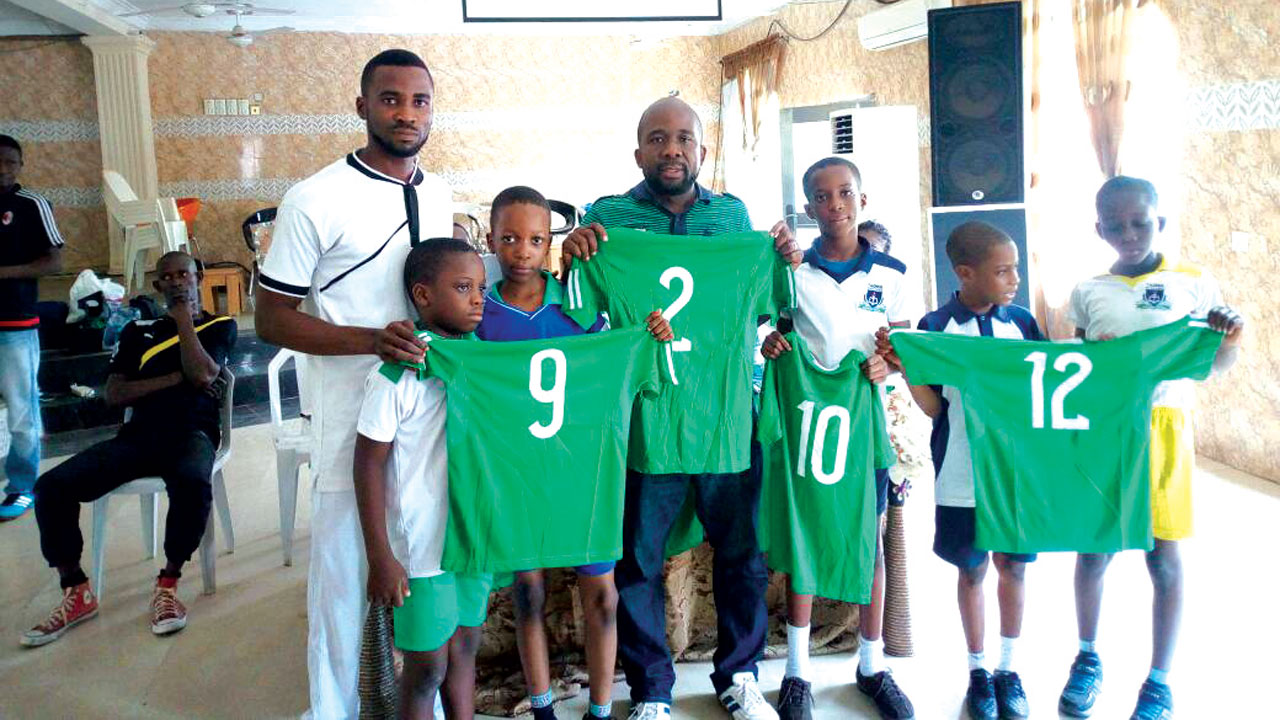 Tayo Adeyemo of Wonderland (left), Coach Adukwe Ekene and pupils of Taqwa Schools, Ifako Ijaiye during the presentation of jerseys to the school ahead of the third Lagos Inter-School Cup held at Phidel Schools Isheri, Lagos…at the weekend.

Organisers of the third Lagos Inter-Schools Cup, Wonderland Sports, has unveiled former junior international, Segun Fetuga as the brand icon of the competition, which features schools drawn from across the state.

Fetuga was still in secondary school when he joined the cadet national team, Golden Eaglets to win the first FIFA U-17 World Cup in China 1985. He later graduated to the Flying Eagles and also played for some clubs in the Nigerian league.

Presenting the competition’s programme at the weekend, Wonderland Sports CEO, Tayo Adeyemo urged schools to complete the registration process by paying up the required fees, adding that arrangement had been completed for the kick off the event.

He said, “Schools should turn in the passport photographs and birth certificates of the students as we want to ensure there are no mercenaries in the competition.”

Adeyemo told The Guardian that the competition was aimed at unveiling hidden talents through sporting competitions among schools and organizations.

“The aim is also to promote friendly rivalries among schools and expose the students’ talents, while teaching them how to combine academics and sports.

Among the schools represented at the programme, which also witnessed the draws, were Dee Unique College, Doregos, at Phidel Schools and Taqwa International School, Agege.

Speaking at the event, Dee Unique College coach, Mr. Amadi urged the referees to soften their approach to the game, saying, “The rate at which players are booked should be reduced because these are children. They should be given the opportunity to enjoy the games. But all other football protocols should be duly observed and penalties should equally be given to any defaulter.”

Coach Amadi boasted that his school team was ready to win the competition in its second appearance because “we are fully prepared.”

Another participant, Mr. Gabriel Ojeleye advised “the organizers to be fair in anything they are doing because this is a way to groom footballers from the scratch.’’