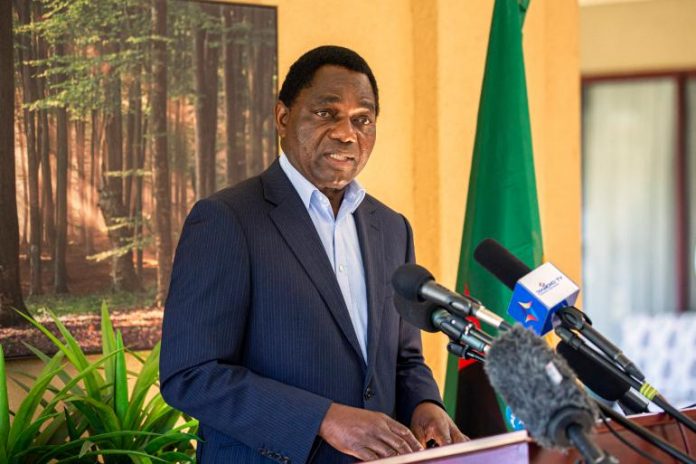 President Hakainde Hichilema has said that gay and lesbian practices cannot be condoned in the country because Zambia is a Christian nation, adding that Zambia can only realign sound democratic values with other countries.

Speaking in an interview with ZNBC News in Lusaka today before departure for Monze on a working visit, President Hichilema dismissed as baseless claims that he has not come out strongly against western countries perpetuating gay, lesbians, bisexual and transgender rights.

Accompanied by Fourth President Rupiah Banda, President Hichilema further told ZNBC News that there is a need to document all Historical Sites in the country before declaring them as Heritage Sites.

And, Fourth President, Rupiah Banda has praised President Hichilema for his stance to enhance national unity and to recognize freedom fighters.

Mr. Banda also observed that historical sites where the struggle for independence was directed must be cherished.

Meanwhile, State House has clarified that President Hakainde Hichilema did NOT taunt or reference his predecessors directly or indirectly during his arrival yesterday from the Conference of Parties 26 summit in Glasgow, Scotland.

Presidential Spokesperson Anthony Bwalya says President Hichilema emphasized how crucially important it is that the new administration shifts the balance of resources from the central government to the communities.

Mr. Bwalya says the President has also indicated that the only way to deliver people-centered development is allowing the people to be in charge of how resources are dispensed at local level as well as be accountable for the use of the resources.

In a statement to ZNBC News today, Mr. Bwalya said President Hichilema and the new dawn administration’s policy on decentralization is aimed at bringing an end to the counterproductive norm of centralized government bureaucracy.

Mr. Bwalya says this has historically acted as a catalyst for corruption and theft for public resources limiting development dividends.