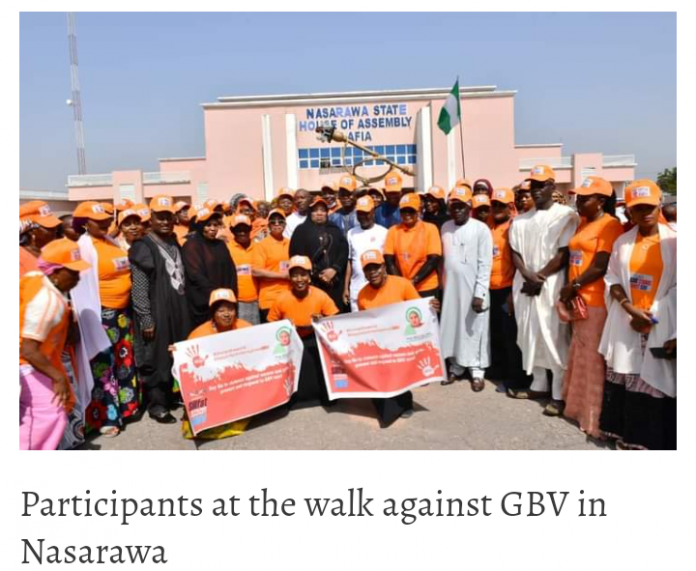 The First Lady of Nasarawa State, Salifat Sule, has led female folks in the state on a road walk in a bid to end Gender Based Violence in the state and Nigeria.

The road walk against Gender Based Violence which was organized by the Salifat Abdullahi Sule Hope Foundation, in conjunction with some Non-governmental Organisations, began at the Government House and ended at the State House of Assembly complex in Lafia on Monday.

Addressing members of the State House of Assembly, the First Lady explained that women’s rights had been the most abused and neglected despite several campaigns launched to create awareness which was why they embarked on the road walk to express their grievances to the legislative arm of government.

Salifat Sule, who spoke through the Wife of the State’s Deputy Governor, Sheila Akabe, said that women of the state were not happy with the constant abuse of the girl child in the country and called on lawmakers both at the state and federal levels to pass bills that would protect the rights of the girl child into law.

She said, “We as women in Nasarawa state are not in support of the several abuses affecting the girl child that is why we are ending our 16 days activism with a walk right from the Government House to the State House of Assembly to register our grudges and to register our presence here with the Speaker”.

Responding, Speaker of the House, Ibrahim Abdullahi, who was represented by the Deputy Majority Leader, Ogah Ogazi, explained that the Assembly was doing everything possible to proffer a lasting solution to issues affecting the girl child in the state.

He said, “Our dear First Lady, we have been following your programmes and we know that you have been making frantic efforts to fight against Gender Based Violence in Nasarawa state and Nigeria at large and we want to assure you that your efforts would not be in vain.

The House of Assembly is with you and I want to use this opportunity inform you and other female folks in the state that Mr Speaker recently sponsored a bill in that direction and it has been passed by the assembly and as well assented to by your husband, the governor of the state.”