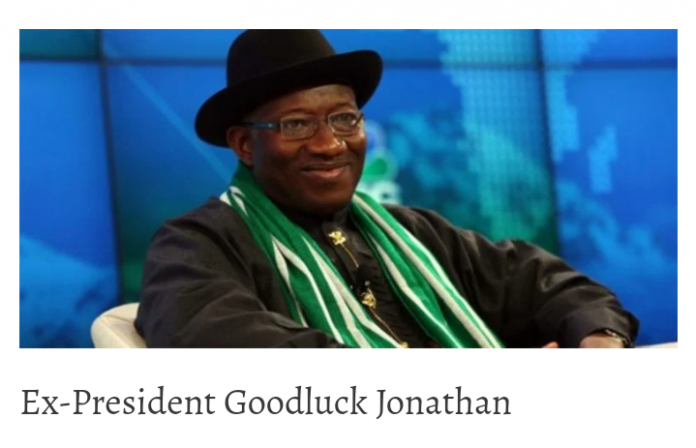 Former President Goodluck Jonathan on Friday called on Nigerians to emulate a former Head of State, General Yakubu Gowon, and a former governor of Plateau State, Jonah Jang, who he described as patriots making untiring efforts towards the good of the country.

According to Jonathan, after exiting public office, Gowon and Jang have continued to work towards Nigeria’s unity and are leaving enduring legacies for Nigerians.

Jonathan spoke in Jos during the official dedication of the 10 Commandments Prayer Altar built by Jang at Doi, Jos South LGA, Plateau State.

The ex-President was the chairman on the occasion.

Jonathan said, “Gen. Gowon used the gun as military Head of State to fight and keep Nigeria united and later dropped the gun and picked a great and mighty weapon, which is the Bible, to bring Nigeria together through the Nigeria Praise and Jang is doing the same thing in a very special way.

“Jonah Jang is really following the footsteps of General Gowon; he was a firm soldier who used the gun to keep Nigeria together having served as military governor, civilian governor and has been in the Senate now, using the Bible to as weapon for the unity of Nigeria.”

Jonathan thanked Jang for his vision, dreams and foresight in building ‘10 Commandments Prayer Altar’ and challenged Nigerians to ask themselves what they would be remembered for when they are no more.

He added, “I want to thank the former governor for his vision of building this facility, this is very significant. As Christians, we pray anywhere but sometimes we need a convenient place to commune with God. This is just like going to the mountain to pray. This facility is for all Christians who need to use it for prayers. As a former governor, he has done many things but this is the most important thing.

“It is a lesson for us all, not everyone can mobilise resources to build this but in our little way, we can build prayer altars in different forms. This has taught us a big lesson and I ask myself, what will I do that people will remember me for?”

Also, Vice President Yemi Osinbajo, represented by the Chaplain, Aso Villa Chapel, Pastor Seyi Malomo, urged that the altar of prayer be used to pray for unity in the country because “victory is our portion when we are united.”

Earlier, Jang disclosed that the facility was the actualisation of a vision he had some years back in obedience to God’s will.

He said, “The Bible is replete with instances where altars were built. Each time there was an encounter with the Lord, an altar was built as a memorial of God’s visitation. This was a regular occurrence in the life of our father of faith, Abraham, and the generations that followed him.”

Plateau State Governor, Simon Lalong, represented by the State Commissioner for Agriculture, Hosea Finangwai, described Jang as a vision carrier, saying “We will key in and continue to emulate your steps in building Plateau State.”

President of the Church of Christ in Nations, Rev. Dachollom Datiri, who dedicated the facility, prayed that the body of Christ witness unity as Christians gather to pray.