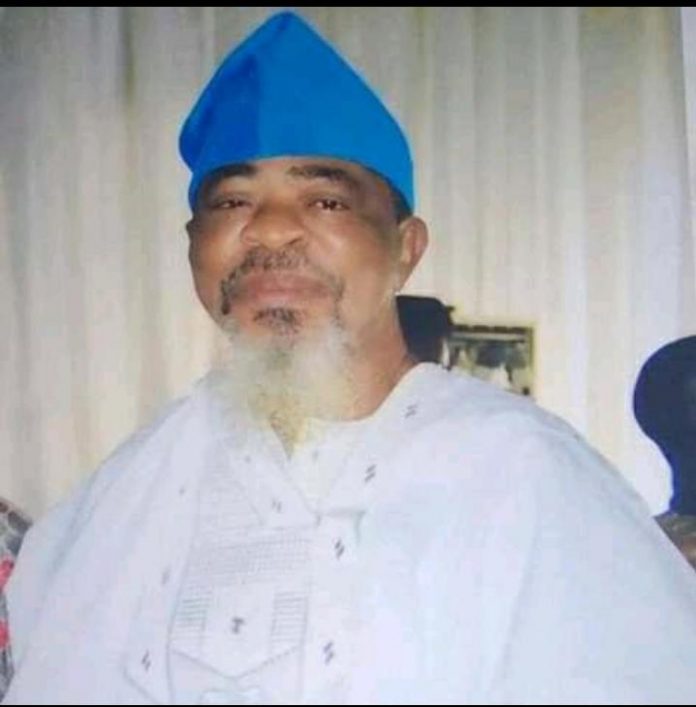 Call him Baba Musician, Baba Awon Elere, Professor of Music he will always reciprocate with his usual gentle mein and gentlemanly look.

When the history of popular West African Music ,especially with regard to Highlife music genre is to be truly and authoritatively written, one name that will continually resound and have a global acclaim and respect will be Samuel Babafemi Esho, the indefatigable patron and promoter of Evergreen Music, both home and abroad.

Femi Esho is a purveyor of Nigeria and Ghanaian music of Yesteryears who have made it his life’s mission to preserve the posterity and longevity of an era threatened with oblivion.

Being a Key player in the industry himself, Femi has an almost encyclopaedic knowledge of Evergreen music masterpieces that enshrine the best of African culture and tradition.

As the iconic founder of the Evergreen Musical Company , Femi holds an esteemed position of trust and stewardship with the vintage music community causing him to be appointed as a sole custodian and distributor of the complete works of many African music legends for whom he campaigns tirelessly in a bid to immortalize their achievements as a symbol of cultural continuity through sound.

Born precisely on 29th October, 1946 in Ilesa Osun State of Nigeria, before Nigeria’s Independence and at a period when highlife was the signature tune for the growing West African entertainment scene, Femi Esho has since his birth metamorphosed into Africa’s foremost indigenous music revivalist, especially the highlife music genre.

As a young boy growing up amidst the emergence of a great music phenomenon referred to as Highlife, Femi Esho had a somewhat oddly hot passion for various genres of indigenous music of his time and felt the power and effect of music in the society. Thus, he realised early in life that music is a universal language, which cuts across all frontiers of human life, be it political, religious, tribal or social.

Since the age of 12, he has been going around to all nooks and crannies of the world collecting musical works of Nigerian and African musicians.

As a result of his self chosen musical adventure it was easy for Femi Esho to collect the works of most of these iconic musicians from Ghana, Benin Republic, South Africa, Togo, Nigeria,etc. He frequented many social clubs dining with different musical giants to unravel the mystery and magic music held for them. He was a regulee at popular clubs like Paradise Hotel, Independence Hotel, Central Hotel all in Ibadan.

He later rose to become a first class secretary to his Excellency.

After his seven years service with Lagos State Government , Femi had a five year stint with the biggest Nigerian architectural company at that time ( Niger Consultant Architect with over 35 architects under his supervision.

He thereafter set up an Advertising / PR Agency Which later metamorphosed into a first class printing consultancy till early 90’s when he now gave his entire life to music.

With a furry passion for music and with the various requests from many of his friends and top elders in the society, Femi Esho was propelled to form the Evergreen Musical Company Ltd.

The major rationale for the company formation was to among other things ease the yearnings and tension of the various senior age groups and connoisseurs of good heritage music who yearn for music with Content and Philosophy.

He also formed an Evergreen 21 piece band in 1993 and the band has performed in Highbrow places like Metropolitan Club, Ikoyi Club, Muson Center, Island Club, Yoruba Tennis Club and for various corporate conglomerates.

Alongside all of these and still for the love of music , Femi Esho has over the years presented various television and radio programs in virtually all the high class TV and Radio stations across the country.

The longest was his famous “Highlife Renaissance Program” on Raypower which he presented on Sundays between 4-5pm for a period of about three years while his last major television program was his 1 hour insight into NIGERIA’S music from 1914 – 2014.

Today Femi Esho is the undisputed largest collector of music of yesteryears with over 150,000 vinyls plates made up of 78rpm breakable plates, 45rpm and 33rpm, hundreds of reel to reel tapes, thousands of cassettes tapes of various music along with archival materials such as His Masters Voice ( HMV), various reel to reel machines, various turn tables with the oldest 100 years, books and newspaper article on Nigerian Music, video recordings of early Nigerian music icons.