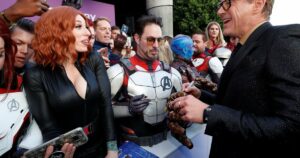 Robert Downey Jr., Chris Hemsworth and other members of the Avengers superhero team on Monday celebrated the final chapter in a 22-movie saga that ranks as the movie industry’s highest-grossing franchise of all times.

At a lavish premiere in Los Angeles, hundreds of industry important personalities, cast members, fans and media watched the first showing of “Avengers: Endgame,” the three-hour action spectacle that has been held tightly under wraps.

The movie begins rolling out in theatres around the world on Wednesday.

A cavernous exhibit hall was turned into a movie theater with a large screen and stadium-style seating.

“I’m excited that I’m finally going to get to see the movie,” said Paul Rudd, who plays Ant-Man and, like other cast members, had not seen the finished film due to Marvel’s secrecy around the project.

Rudd said he had been traveling round the world to promote the movie and “trying to talk about it the best we can”, and to do all of that without having seen the film is a strange experience.

“So now, to finally see the movie is great.”

Other A-list stars packed the premiere, including Chris Hemsworth’s brother Liam and his wife, Miley Cyrus, and Matt Damon, who had a cameo in 2017 film “Thor: Ragnarok.”

It picks up after last year’s “Avengers: Infinity War” left fans hanging when many of the Marvel heroes seemed to turn to dust at the hand of the villain Thanos, played by Josh Brolin.

In “Endgame,” the surviving superheroes plot to kill Thanos and try to undo his damage.

After the screening, the stars gathered on stage and hugged. Evans told the crowd that he “cried like six times” while watching the film. “I cried more than six times, Chris,” Hemsworth said.

Mark Ruffalo, who plays the Hulk, said working on the films had been “the trip of a lifetime”.

The 21 previous movies from the Walt Disney Co-owned Marvel Studio are the highest-grossing franchise in film history, generating more than $18.6 billion at global box offices since 2007.

“Endgame” may set an opening weekend record in the domestic market, according to box office analysts.

“Infinity War” holds the current record of $257.7 million over its first three days in the U.S. and Canada.

Initial reactions to “Endgame” were positive.

“If Infinity War is the brawn, Endgame is the brains. And wow, what an ending!” Davis wrote on Twitter.

While “Endgame” wraps up the “Avengers” story, many Marvel characters will live on in future movies. Spider-Man, for example, returns to the big screen in July in “Spider-Man: Far from Home.”

A “Black Panther” sequel is also in the works.

“There will be new ways of doing it, but for now the focus is on the endgame.”

I Am Having Rough Times At Oxford University, Cuppy Cries Out