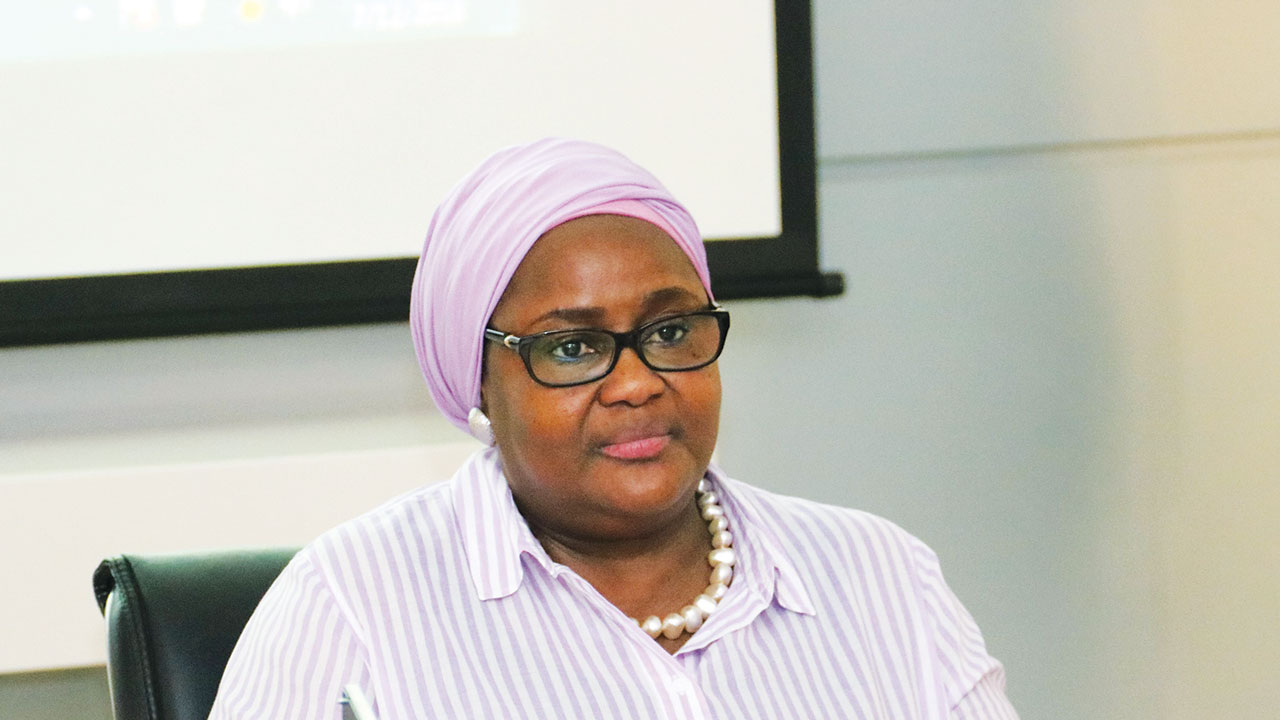 Mrs. Aisha Dahir-Umar is the Acting Director-General of the National Pension Commission (PenCom). Despite acclaimed achievements with the Contributory Pension Scheme (CPS), the industry is yet to capture the objectives of the section 39(2). In this interview with BANKOLE ORIMISAN, she speaks on how budgetary funding/releases had not been regular and adequate for the payment of outstanding accrued pensions in last five years as a result of decline in government revenue.

The Pension Reform Act 2004 established Contributory Pension Scheme (CPS) to ensure retirees receive pension as at when due. But this has not been the case for over five years. What is the Commission doing to clear the backlog and achieve the objective of the pension reform?

Please recall that Section 39 (2) of the Pension Reform Act (PRA) 2014 mandates the Federal Government to pay into the Retirement Benefits Bond Redemption Fund Account an amount not less than 5% of the total monthly wage bill payable to employees in the Public Service of the Federation towards the redemption of the accrued pension right of FGN retirees.

However, in the last five years, budgetary funding/releases had not been regular and adequate for the payment of outstanding accrued pension rights over this period as a result of decline in government revenue.

What is the current backlog position in the country as at today?
With the full release of the total amount approved in 2018 FGN budget by the Federal Ministry of Finance, the Commission had been able to pay FGN employees who retired up to the Month of February 2018 as at 23 January 2019.

In essence, by the end of January 2019, retirement benefits of FGN employees who retired between June 2018 and January 2019 will still be outstanding due to shortfall in budgetary provisions in year 2017 by the FGN.

What is the Way Forward?
The Commission has been engaging the relevant Authorities to ensure  funding of the outstanding accrued right liabilities especially the shortfall in 2017 budget.

A submission had been made to FGN during the Inter-ministerial Committee meeting in 2017, to consider issuance of Bond through the Debt Management Office (DMO) to fund these arrears as alternative to budgetary allocations.

The commission commenced the Multi-Fund Structure in July 2018. Kindly give us an update on challenges and successes recorded so far?

The RSA Multi-Fund Structure which commenced in July 2018, was conceived by the Commission to align contributors’ risk appetite with their investment horizon, at each stage of their life cycle.

The main objectives of the RSA Multi-fund Structure include the following:

i. Achieve optimum returns for contributors by aligning their pension savings with their individual risk/return profiles;

iii. Enhance safety of pension assets through adequate portfolio diversification, through increased investment in equities and alternative assets such as infrastructure and private equity.

ii. RSA Contributors now have the opportunity to choose a Fund that best suits their risk-return profile.
What is the challenges so far in the industry?

i. Low Public Education/Awareness: There is low public awareness of the workings and benefits of the current Contributory Pension Scheme (CPS).ii. Limited Investible Securities: The Bond Market is currently dominated by FGN Bonds which offer relatively high yields, and thus crowding out non-government bonds Similarly, there is a dearth of alternative assets such as Infrastructure Funds, Private Equity and Real Estate that meet the investment requirements of pension funds .

The RSA Multi-Fund Structure is still at the very early stages of implementation, with just six months of commencement.

A lot of public education/sensitization is still required; and the Commission, in collaboration with pension operators is already implementing aggressive campaigns via newspaper adverts, editorials, TV and radio appearances as well as maintaining active presence on other alternative platforms such as Twitter (@PenComNig) and Facebook (National Pension Commission).

Investment of pension fund seems to be going more into FGN securities. Most of the time it is about 70%, why is it like this? Why has the fund not been more diversified into other lucrative safe projects?

Accordingly, pension funds may be invested in the following securities:

i. The major objectives of pension fund investment are “safety” and “fair  returns”. FGN Securities are viewed as “risk-free” securities, and over the last couple of years, the Nigerian fixed income market had been dominated by FGN Securities which offer relatively high yields.

This situation is however not peculiar to the Nigerian capital market as most emerging and frontier markets are dominated by sovereign bonds.

ii. The high yields and low risk offered by FGN Securities, as well as the volatility of the stock market in recent years, had influenced the “flight to safety” approach adopted by pension fund managers to safeguard the value of pension assets and minimise losses to contributors.

What are the trend in the market that will make a good impact in the next 5 years?
The Commission had recently embarked on a number of initiatives which would impact positively on the Nigerian financial market and economic development in the mid to long-term. These initiatives include:

i. Introduction of Micro Pension and Non-Interest Funds:
The Commission is in the final stages of preparation for the launch of the Micro Pension Scheme, which aims to provide pensions for Nigerians in the informal sector, not covered under the Contributory Pension Scheme.

Similarly, the introduction of the Non-Interest Fund is aimed at enhancing financial inclusion by targeting pension contributors who would prefer access to non-interest financial services.

These initiatives are expected to impact the Nigerian workers and economy as follows:
a) Expand the scope of coverage of the Contributory Pension Scheme.

d) Increase the pool of pension funds, available for investment and economic development.

2014, is to facilitate access by Retirement Savings Account (RSA) holders, to residential mortgages as well as stimulate the housing/mortgage finance sector.

There guidelines are expected to be issued in 2019, and would achieve the following results:
a) Ability of the RSA Contributor to access and utilize part of their RSA balances towards equity contribution in respect of home ownership
mortgages.

b) A boost to the housing / real Estate market and contribute to socio-economic development of Nigeria.

Many companies are still not remitting pension despite deducting the employee portion from salaries, leading the commission engaging recovery agents. Is the commission prosecuting recalcitrant employers?

To ensure compliance by employers of labour with respect to remittance of pension contributions, the Commission has in line with the provision of the Pension Reform Act (PRA) 2014 developed a Framework for Recovery of Outstanding Pension Contributions with penalty from defaulting employers.

Based on the Framework, the Commission has engaged recovery agents for continuous enrolment into the Contributory Pension Scheme (CPS) and recovery of unremitted pension contributions plus penalty from defaulting employers.

The recovery exercise which has been largely successful, has boosted the confidence of contributors and by extension encouraged non-participating employees/employers to embrace the Scheme.

Through this initiative, the sum of ₦15.31 billion representing principal contribution (₦7.85 billion) and penalty (₦7.46 billion) have been recovered from defaulting employers.

Both the principal contributions and penalty have been credited into the workers’ Retirement Savings Accounts (RSAs). T

he penalty is meant to compensate for the income that would have been earned if the contributions were remitted as and when due.

Out that number, 78 had opted to settle out of court with the Commission, 34 Judgments have been obtained while 23 are at different stages in the courts.

Meanwhile, the Commission has a fully functional Complaints Monitoring and Resolution Team which attends to complaints on non/late/under-remittance of pension contributions into employees Retirement Savings Accounts.

The Team has a Regime of Sanctions which guides the administrative steps to be taken when complaints are received.

The process followed in the Regime of Sanctions are Letter of advice, Caution letter, Sanction letter and Legal action.

Accordingly, we appeal to all stakeholders, including the media and employees to forward to the Commission the names and addresses of
employers that are not in compliance with the provisions of the PRA 2014.

It is about 10 years since the Commission has been trying to capture the informal sector through the Micro Pension Scheme. But there is a recent upbeat that you have gotten it right. Give us an update on the scheme?

The Commission has been in existence for more than 10 years but the Micro Pension Plan is a fallout of the Commission’s Corporate Strategy of inclusive and expanded coverage of the Contributory Pension Scheme.

This gave rise to the creation of the Micro Pension Plan with the attendant formulation and development of the Framework and Guidelines for the plan.

The Guidelines have been approved by the Federal Government and issued to the Operators.

The Guidelines have also been hosted on the Commission’s website for public use. The Department has been involved in reaching out to prospective stakeholders as well as collaborating with relevant institutions to create awareness about Micro Pension Plan.

Guidelines on the investment of Micro Pension fund will soon be issued.

Structures are being put in place to ensure effective monitoring and regulation of the plan. PenCom and Operators are collaborating to come up with modalities for a hitch free formal launch and eventual implementation of the Micro Pension Plan.

It is expected that the formal launch of the Micro Pension plan will take place in the first quarter of 2019.

Some operators have been found not to pay pension as at when due despite clearance from the regulator. Does the Commission have adequate capacity to monitor the activities of the operators on funds under their management?

The Commission has sufficient capacity to monitor the activities of all  Licensed Pension Fund Operators as its key objective is to ensure that every person who worked in either the public service of the Federation, State Government or the private sector receives his/her retirement benefits as and when due.

In that regards, the Commission issued a Regulation for the Administration of Retirement and Terminal Benefits, which clearly specified period within which Operators are to contact intending retirees and notify them on documentation needed, mode of retirement and time frame for the processing and crediting of the Retirement Savings Account (RSA) of the beneficiaries.

In addition, Operators are mandated to render monthly pension payment returns to the Commission as well as all benefit payments made within the period, which include the details of the retiree, RSA number, date of payment and amount paid among others.

Furthermore, the Commission conducts On-site Routine Examination of all Licensed Pension Fund Operators to review the benefit Administration of the PFAs including timeliness for benefit payments among others.

However, sometimes the delay in payment of benefits by some Licensed Pension funds Operators could be attributed to the following:

i. Incomplete documentation from retirees,

iii. Delayed payments/remittance of Accrued Rights for employees of Treasury Funded MDAs of FGN prior to 2004.