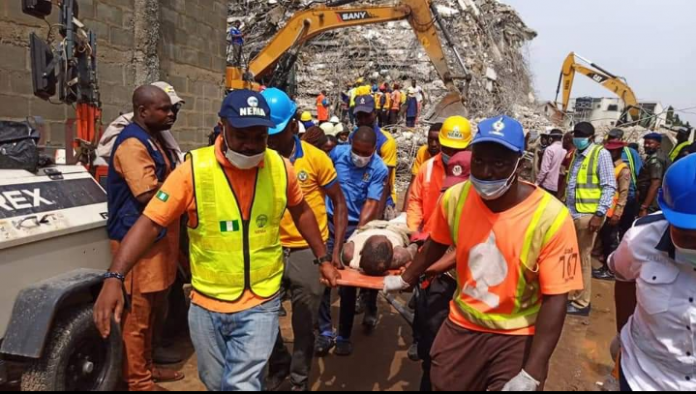 The families of those trapped in the rubble of the building that collapsed in the Ikoyi area of Lagos State have begged to join the rescue operations which have entered Day 2.

The PUNCH reported that the 25-storey building collapsed on Monday trapping no fewer than 20 people in the rubble.

Federal and state emergency agencies currently at the site of the collapsed building have managed to rescue nine survivors while the remains of 10 people have been recovered.

The site has been cordoned off by security operatives consisting of soldiers of the Nigerian Army, Police operatives and officers of the Lagos Neighborhood Safety Corps.

This was done to prevent a crowd from gaining access to the rubble of the collapsed building.

However, 10 men were selected to join the rescue operations from among those claiming to have a loved one trapped in the rubble of the collapsed building.

The women in the crowd could be heard begging to gain access, while others were in a sad mood.

One of them who was heard talking to newsmen lamented that the rescue operations have yielded nothing since it began.

“It’s almost 24 hours, they are not doing anything,” she said.

Her clamour for authorities to allow people to have access to the site was supported by the crowd.

The PUNCH later learnt that the 10 men who were allowed to join the rescue operations were sent out of the site.

When they were approached for comment as to why they were sent out, they said no reason was given to them.

Meanwhile, four more bodies have been recovered from the rubble as of the time of filing this report. They were immediately placed inside a van of the Lagos State Emergency Management Authority and taken away to the morgue.