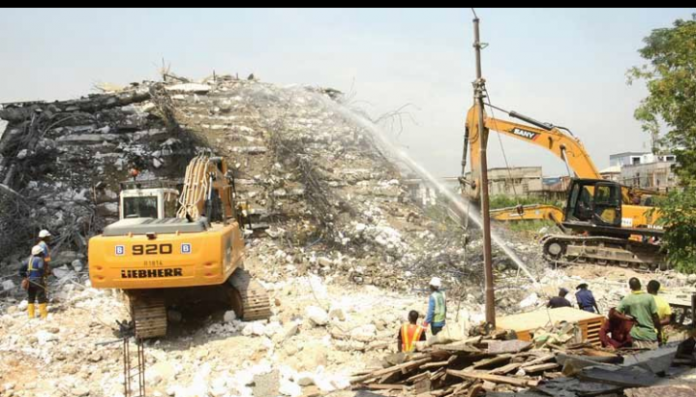 Rescue operations at the scene of the collapsed 21-storey building in Ikoyi, Lagos.

Father to one of the alleged victims of the 21-storey building that collapsed at Ikoyi, Abel Godwin, has stated that he travelled from Abuja to Lagos because his 18-year-old son was involved in the accident.

According to him, he heard of the accident on Tuesday and arrived in Lagos at 2am on Wednesday.

He said, “I came from Abuja by 2am this morning. My son is one of the victims. He’s 18 years old. I got this information around 10am yesterday. I hit the road and I got here at 2am. Ever since then, I have been here.”

He noted that he was directed to Mainland Hospital Yaba, formerly Infectious Disease Hospital, to identify his son.

He said, “I have been directed to go to IDHA. I went there but they couldn’t allow me to enter.”

Godwin also stated that he has filled in the form about his son’s information.

The Governor, Babajide Sanwo-Olu, asked him to remain patient, adding that he would be reached if there’s any update.

Sanwo-Olu said, “Exercise a little bit more patience. We have your telephone number and everything.

“By tomorrow at the latest, once we conduct the autopsy, they will be invited to the morgue to identify the various corpses that we have.”

The PUNCH had reported that the building which was still under construction collapsed on Monday on Gerrard Road, in the Ikoyi area of Lagos State.

Rescuers on Wednesday said they had recovered 22 dead bodies so far and rescued nine people who survived, but construction workers feared dozens of their colleagues were trapped inside.