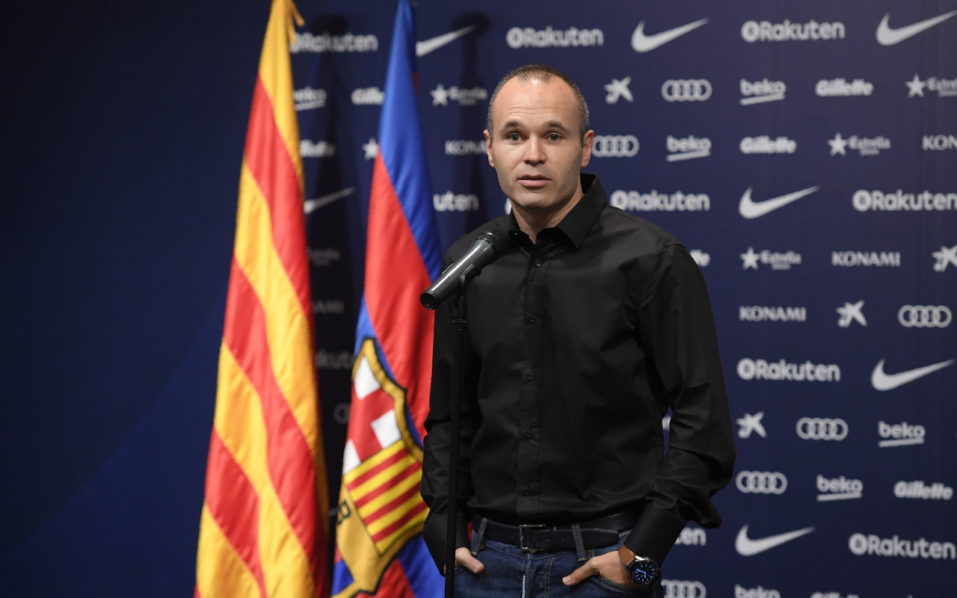 Barcelona's midfielder Andres Iniesta speaks after renewing his contract at the Camp Nou in Barcelona on October 6, 2017. Barcelona tied down captain Andres Iniesta for the rest of his career as the club announced the 33-year-old midfielder has agreed a "lifetime contract". Normally determined to shy away from the spotlight, Iniesta spoke out to urge negotiation and prevent a spiralling political crisis over the battle for Catalan independence deepening. / AFP PHOTO / LLUIS GENE

Barcelona tied down captain Andres Iniesta for the rest of his career as the club announced on Friday the 33-year-old midfielder has agreed the first “lifetime contract” in Barca’s history.

“It is a way of rewarding an exceptional player,” said Barcelona president Josep Maria Bartomeu.

Iniesta insisted, though, that he has not planned any future role with the club beyond his playing career.

“The lifetime title doesn’t mean that I will remain here just for the sake of it. It isn’t my way of doing things,” said Iniesta.

“When I don’t have the same force or importance I have always had things can always change.

“Today I am hugely grateful for the confidence the club has shown in me.”

Along with five-time World Player of the Year Lionel Messi, Iniesta is Barca’s most decorated player of all-time having won 30 trophies at club level, including eight La Liga and four Champions League titles.

Iniesta has also made the second highest number of appearances in a Barca shirt behind Xavi Hernandez with 639 since his debut 15 years ago.

“There is no other player in the club like him. He will be a reference for future generations,” added Bartomeu.

“I always say to the kids in the academy, to fixate on him as a player and a person.”

Born in the central Spanish region of Castilla-La Mancha before joining Barca at the age of 12, Iniesta is a beloved figure across Spain as he scored the winning goal in the 2010 World Cup final.

Normally determined to shy away from the spotlight, Iniesta repeated his call for cool heads and negotiation to prevent a spiralling political crisis over the battle for Catalan independence deepening.

Hundreds required medical attention on Sunday as voters in a referendum on independence, deemed illegal by Spain’s central government, clashed with police.

“One always tries to look at things with logic and sense. We hope that everything calms down,” he said.

However, Iniesta will not be present as Spain look to book their place in next year’s World Cup later on Friday against Alicante in Albania as he has pulled out with a hamstring strain.

Messi next to renew?
Iniesta has previously tended to do his talking on the field as a fundamental figure in Barca’s most successful ever era.

Alongside long-time midfield partner Xavi for both club and country, Iniesta formed the axis of Pep Guardiola’s legendary side that won 14 trophies in four years between 2008 and 2012.

His previous contract was due to expire at the end of the season and doubts over his future were raised when he refuted Bartomeu’s claims that a deal “in principle” was in place last month.

However, he refused to rule out retiring at the end of the season should he continue to be dogged by injury.

“I will be here as long as my body, mind and all I have to give is enough,” he added.

“Right now it is difficult to imagine what I will think in May or June.”

Tying down Iniesta eases some of the pressure building on Bartomeu for his handling of both sporting and institutional matters in recent months.

However, Bartomeu is still to convince Messi, who is also out of contract at the end of the season, to sign a new five-year deal agreed back in July.

“The club want Leo to stay here and he wants to stay,” said Iniesta.

“Hopefully, this story never ends because he is unique and is indispensable for success.”