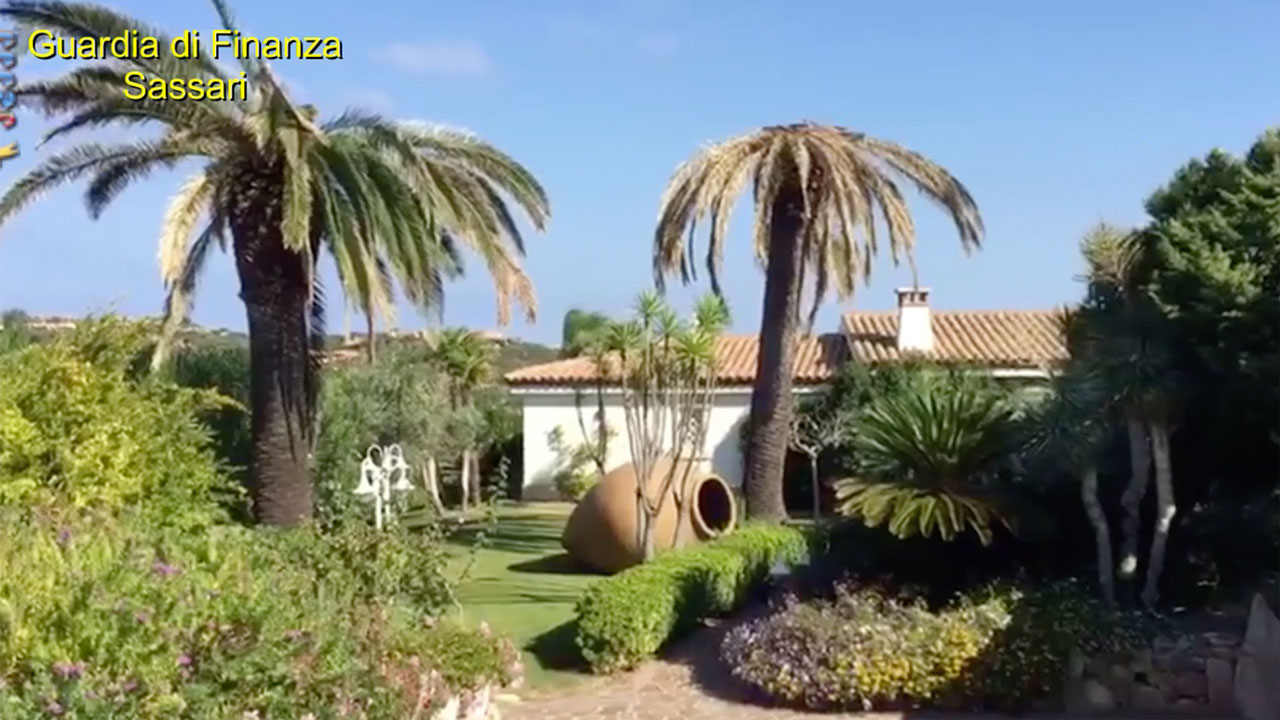 This handout video grab released on October 13, 2017 by the Italian "Guardia di Finanza" shows a part of the "Villa Bianca" in Porto Cervo, Sardinia. Italian police said they had searched and seized the luxury "Villa Bianca", owned by an international real estate agency, today, as part of investigations against Paris Saint-Germain chairman Nasser al-Khelaifi and former top FIFA official Jerome Valcke. Khelaifi, the powerful Qatari sports executive who heads the BeIN media group, is said to have used the villa in Porto Cervo as a "means of corruption" over the sale of media rights for upcoming World Cups between 2018-30. HO / AFP

Italian police, who have searched the luxury villa in Porto Cervo, said Khelaifi had put the property at the disposal of disgraced ex-FIFA secretary general Jerome Valcke.

Khelaifi and Valcke, who was Sepp Blatter’s right-hand man at FIFA until both were drummed out of world football’s governing body, were placed under investigation by Swiss prosecutors on Thursday over the sale of World Cup media rights.

Khelaifi has close links to Qatar’s ruling family and heads the Gulf state’s beIN media group, which has a portfolio of channels in countries including France, Turkey and Australia.

FIFA said Friday it was also investigating Khelaifi over the media rights issue.

Italian police said they had searched and seized the “Villa Bianca” property set in a lush garden on the Mediterranean island in a raid conducted in the presence of a “representative of the Swiss government”.

Several people “linked to various titles to the company that owns the villa” have been questioned, police added, without giving further details.

The villa, with an estimated value of seven million euros ($8.3 million), is owned by an international real estate agency.

Valcke’s lawyer denied any wrongdoing, telling AFP his client, FIFA’s secretary general from 2007 to January 2016, had paid rent for the property.

“There was a contract and Mr Valcke paid the rent,” Stephane Ceccaldi said.

Wide-ranging probe
The Swiss attorney general’s office said their probe into Valcke and Khelaifi focused on media rights for upcoming World Cups between 2018-30 and includes allegations of bribery, fraud, criminal mismanagement and forgery of a document.

The investigation comes in the wake of Valcke’s appearance on Wednesday at the Court of Arbitration for Sport in Lausanne to appeal his 10-year ban from all football-related activity.

Prosecutors have indicated that Khelaifi was under suspicion only for actions taken as the head of the beIN group.

The Qatar broadcaster has denied any wrongdoing while confirming French authorities had raided the company’s Paris offices at the request of Swiss authorities.

The audacious 222 million euro transfer from Barcelona was widely seen as an example of gas-rich Qatar, which will host the 2022 World Cup, exercising its “soft power”.

The club, which was bought by Qatar Sports Investments in 2011, is not implicated in the Swiss investigation.

The probe into Khelaifi adds to the controversy surrounding the Qatar World Cup.

Organisers on Friday hit back at suggestions the desert nation will be stripped of the tournament.

Nasser al-Khater, assistant secretary-general at Qatar’s Supreme Committee for Delivery and Legacy, responded on Twitter after a noted critic claimed bookmakers had shortened odds on the World Cup being taken away from Qatar.

Earlier on Friday, Ghanem Nuseibeh had tweeted: “William Hill offering odds 25% chance FIFA 2022 will not be held in Qatar.

That prompted an uncharacteristic outburst from Khater, who wrote: “The odds were 6000 to 1 against us winning the bid in 2009. Guess what happened on Dec 2, 2010”, referring to the date Qatar won the FIFA vote.